Portraits of a carefree age

Pablo Picasso and Edward Quinn (1956): The artist and the photographer shared a long friendship.

Photographer of fame and brilliance. Aristocrats, movie stars, business magnates—international high society in all its photogenic glory flocked to the French Riviera in the postwar years. How fortunate that Edward Quinn and his camera were also on hand to capture images of this exquisite era for posterity.

Europe in the early 1950s: the pall of World War II has not yet lifted, but confidence in the future is widespread. Things are looking up, people are striving for better lives—and no one embodies the promise of happiness more perfectly than the fairy-tale figures of this age of hope: movie stars and directors, singers and artists, aristocrats and industrialists. The public is captivated by their lives and exploits; it dreams of their splendid soirées, their elegant attire, and their sophisticated automobiles. As for the rich and beautiful themselves, they have already found the place of their dreams: the Côte d’Azur. Cannes, Nice, and Monaco attract more prominent individuals than anywhere else in Europe. With a mild climate, pristine beaches, fashionable hotels and casinos, and not least of all a principality straight from a picture book, this stretch of the Mediterranean coast is the perfect stage for la dolce vita.

Audrey Hepburn (1951): The young woman posing for Edward Quinn at the waterfront in Monaco was still largely unknown at the time.

Sophia Loren (1955): Why would the diva need a lemon squeezer in the car?

From the Berlin Airlift to the Côte d’Azur

The fact that these glamorous years are etched so vividly in our minds is due in no small part to the photographer Edward Quinn. Born in Ireland, he worked as a radioman for an airline after the war and flew with the planes of the Berlin Airlift. In 1949 he moved to Monaco to be with Gret, the woman whom he would marry. There he tried his luck as a guitarist under the marvelous stage name of Eddie Quinero, until one day he happened to acquire a camera. Quinn realized he had a talent for photography, promptly converted a friend’s kitchen into a darkroom, and sold his first shots to magazines and agencies. Soon he was pointing his lens at the ubiquitous stars and millionaires, attending movie premieres and receptions, and persuading airport staff to reveal the arrival times of Alfred Hitchcock or Kirk Douglas.

A mustachioed beanpole of a man, he took pictures of a great many celebrities, including Grace Kelly—who, as Princess Grace, soon became something like the queen of the Côte d’Azur—as well as superstars including Gary Cooper, Cary Grant, and Peter Ustinov. He also photographed the still largely unknown Audrey Hepburn and Brigitte Bardot, bon vivants like Giovanni Agnelli and Gunter Sachs, and artists such as Pablo Picasso, with whom he would cultivate a decades-long friendship. Thanks to a combination of charm, reserve, and a pronounced sense of both composition and timing, Quinn produced portraits with an expressive quality that today’s trigger-happy paparazzi cannot hope to match. He enjoyed a closeness with the stars and presented them as they themselves wanted to be seen—and also how the world wanted to love them: beautiful, elegant, full of joie de vivre, immersed in the moment.

Rainier III: Inaugural ride to the Monaco Grand Prix in the 356.

Grace Kelly (1955): A smile that spreads the brilliance of fame.

Members of high society are, of course, always accompanied by their fast and luxurious vehicles. Imposing limousines from Hispano-Suiza and Rolls-Royce rolled down the Promenade de la Croisette and the Promenade des Anglais, along with gleaming chrome cruisers from the United States and the small Italian sports cars that exerted an irresistible attraction on many stars. The first s also found their fans on the French Riviera—including shipping magnate Aristotle Onassis. Quinn photographed him driving up to Cannes’ Carlton Hotel in a 356 in 1953, with large sunglasses and elegantly combed-back hair. But sports cars from the young German brand were not only popular on the boulevards. The year 1953 also saw 356s zooming through the winding course of the Monte Carlo Rally in the hills behind the coast (Quinn was there too). A few years later, racing drivers like Dan Gurney and Jo Bonnier entered s in the Monaco Grand Prix, which enhanced the fame of the brand along the Mediterranean even more.

Lighthearted enjoyment of the fruits of success

Quinn’s shots of stars and sports cars are valued not only for the nostalgia they evoke. His nephew Wolfgang Frei runs the Edward Quinn Archive in Switzerland, which contains more than 150,000 images from the 1950s to the 1970s. Frei often receives inquiries from collectors, auction houses, and restorers about photos of various VIPs with their cars. Classic sports cars that Alain Delon or Roger Vadim once raced on the roads of the Côte d’Azur can fetch sums in the tens of millions—if their current state is a detailed match of that documented by historical records. But what exactly is so fascinating about this bygone world preserved with such artistry by Edward Quinn and his camera? It may well have something to do with the glimpse of a more innocent and carefree age. Even the most famous stars exude an air of gaiety and playfulness, as they party with abandon and enjoy the fruits of their success with a lighthearted quality inconceivable these days in our stage-managed world with its press agents, image consultants, and bodyguards. Quinn’s portraits are no random shots either, of course; they too are composed. But if you look closely, you’ll detect in many of the faces a friendly invitation to the viewer, even if only in the form of a nod or wink, to celebrate life. Perhaps there is also a readiness to share special moments with the world—and to banish the shadows of the past with the brilliance of fame.

Kirk Douglas (1953): A cigarette break for the Hollywood star at the Cannes Film Festival. 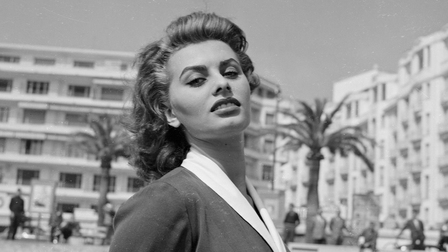 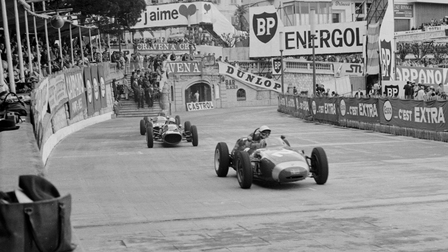 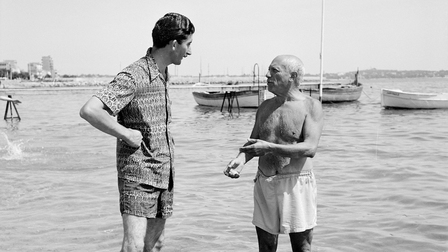 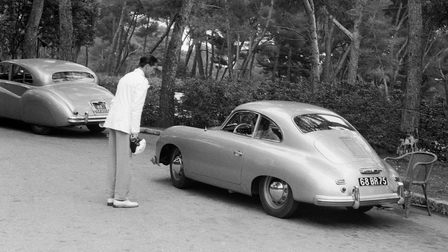 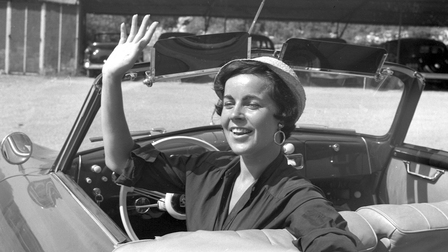 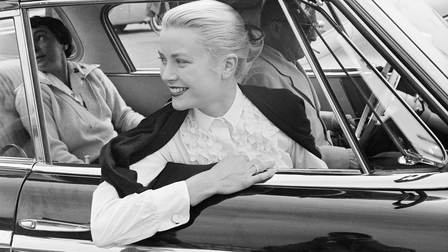 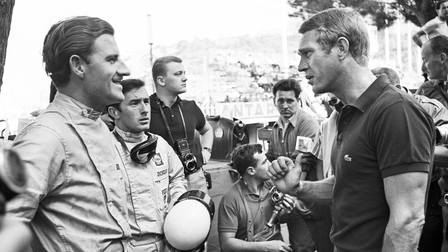 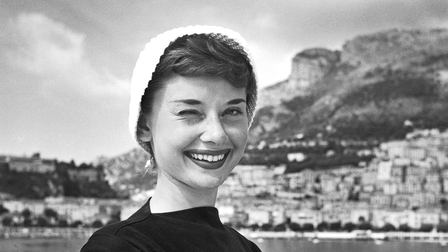 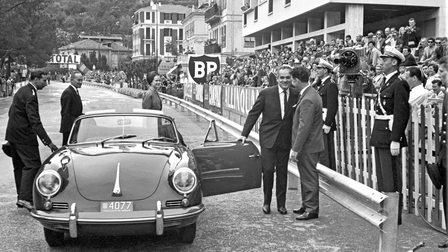