Legends of the RaceTrack

Endurance racing stands for fighting and nail-biting, tears, cheers, and sweat. That’s what makes the drivers heroes. But it’s not just the people who become legends. Cars do, too.

There’s no shortage of prominent number combinations at , but the sequence 9-1-7, at least when it comes to racing, is the most famous of all. It stands not only for the most powerful and fastest race car to date, but also for an entire generation of racing cars that only changes to the rules—not competitors on the track—could stop. When the new rules for the International Championship for Sports Cars were made public at the end of 1967, the team in Stuttgart-Zuffenhausen decided to build a new race car for the under-five-liter class. As the successor to the successful 907 and 908 types, the 917 got an air-cooled twelve-cylinder engine whose power in 1970 was an imposing 426 kW (580 hp)at 8,300 rpms. On June 14, 1970, bagged the first of 16 overall victories at the 24 Hours of Le Mans. After exactly 4,607.81 kilometers, or 343 laps, drivers Hans Herrmann and Richard Attwood took the checkered flag in the legendary 917 Kurzheck (KH) from Salzburg, with start number 23. When Gérard Larrousse and Willy Kauhsen took second in the Martini-917 Langheck and Rudi Lins and Helmut Marko came in third in the 908/02, the sweep of the podium was perfect. 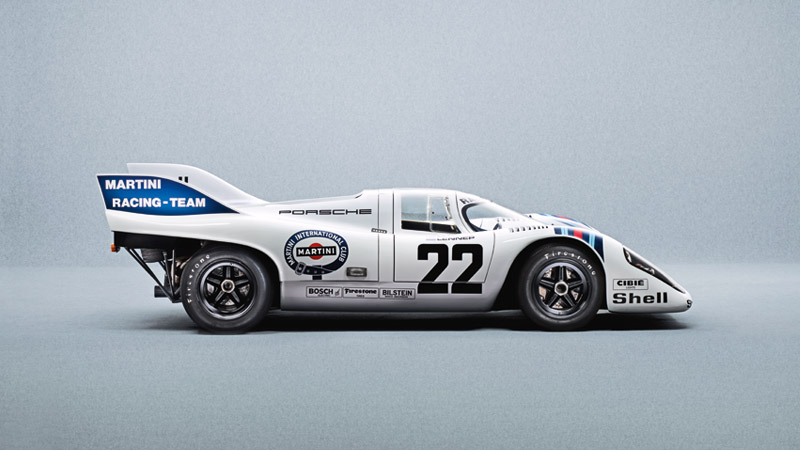 The “shark fins” on the tail gave the 917 KH 1971 greater directional stability and reduced wind resistance by 11 percent.

In 1971 a veritable armada of six 917s started at Le Mans. The car with start number 22 was special. The white race car with the characteristic Martini stripes had the new “shark fins” on the tail that had first used in pretraining in April. They gave the 441 kW (600 hp) race car greater directional stability and reduced wind resistance by 11 percent. This 917 was also the first with a magnesium tubular frame to be used in a race. This made the car so light that the technicians were able to use a 55-liter engine oil tank rather than a 20-liter one to improve the weight distribution and reach the required weight of 800 kilograms. Completed on June 5, the car put in 552 kilometers in training for Le Mans and ultimately raced to victory in the 24-hour race with an average speed of 222.3 km/h and a total distance of 5,335.16 kilometers. With this performance the drivers Gijs van Lennep and Helmut Marko set two records that would stand for 39 years. In typical style, they also won the “Index of Performance,” an award for the lowest fuel consumption relative to engine size. 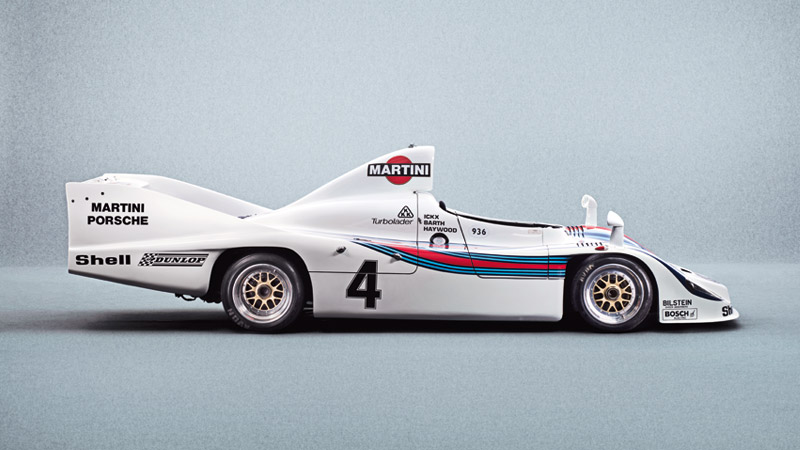 Beyond the Manufacturers’ World Championship, in 1976 also participated in the World Sportscar Championship (Group 6), which was announced shortly before the start of the season. In record time the race engineers developed a new race car in the Type 936 which was to start alongside the 935 production race car. Technically, the development of the open Spyder car took its orientation from the proven 908/03 and 917/10 designs. The result was an aluminum tubular frame covered by an aerodynamic plastic body. The car was powered by the 2.1-liter flat-six bi-turbo engine from the 911 RSR with an output of 397 kW (540 hp). The first road-ready 936—dubbed the “Black Widow” internally for its matte black paint job—was put through its paces in extensive training on the French track by Paul Ricard in the second half of February. In June 1976, Jacky Ickx and Gijs van Lennep drove to a commanding overall victory at Le Mans. In the World Sportscar Championship, had clinched the title after just four of seven races and triumphed at season’s end with the maximum point haul. In 1977, Jacky Ickx, Jürgen Barth, and Hurley Haywood outpaced the armada of six factory Renaults. In 1981, the 936 celebrated a sensational comeback with another overall victory at Le Mans. 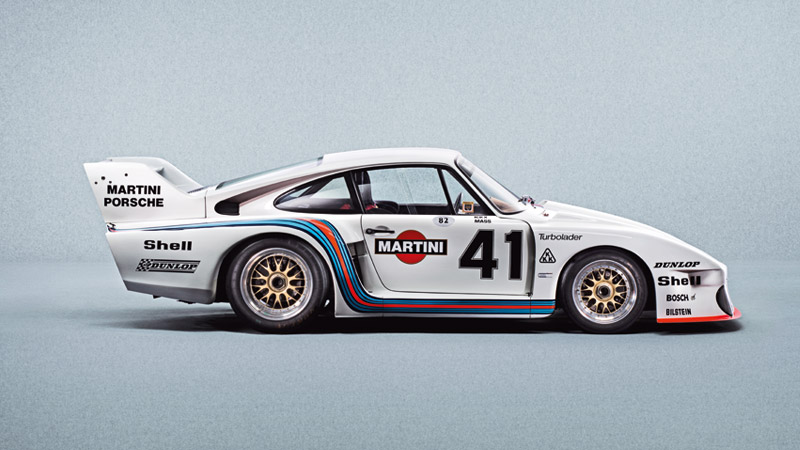 The 935 was a 911 racing version that brought home another World Sportscar Championship in 1976, after a five-year hiatus.

With the end of the prototype racing era, 1976 saw the advent of the great age of production race cars in Group 5. With the 935, presented a nearly 441 kW (600 hp) version of the 911, which brought a World Sportscar Championship back to Zuffen­hausen after a five-year hiatus. Together with the 936, it took the World Championship title in 1976 and, thanks to numerous customer teams, dominated the races of Group 5 until 1981. Successful drivers of the 935 included Jacky Ickx, Jochen Mass, Klaus Ludwig, Rolf Stommelen, Manfred Winkelhock, and Bob Wollek. Technically, the 935 was based on the 911 , but visually it was distinguished by its aerodynamic “flat nose” as well as its striking double rear wing. In 1977, the aerodynamics of the 935 were optimized once again. The boxer engine was also outfitted with a second turbocharger, which boosted the power to 463 kW (630 hp). successfully defended its title, and Rolf Stommelen won the German Racing Championship in the private Loos 935. In the years that followed, numerous factory and private drivers celebrated wins in the 935. 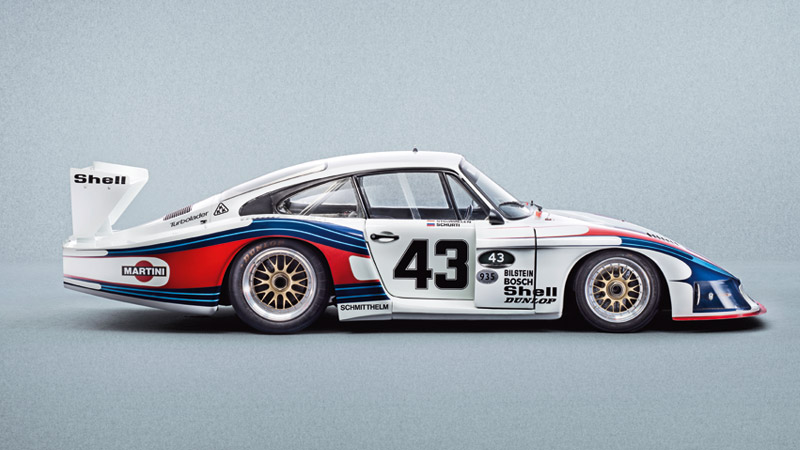 The culmination of the 935 development story was the 935/78 of 1978—still the most powerful 911 ever. Dubbed “Moby Dick” for its wide long-tail body, the muscular 935 differed from previous models in its modified frame, aerodynamically optimized body, and right-hand drive. With the objective of boosting engine performance and robustness, an engine was developed to be raced out of competition. There had been problems with the cylinder heads, but they were now simply welded together. For cooling, too, a compromise had to be found: water was used to cool the cylinder heads; air was used to cool the cylinders. With the newly introduced four-valve technology, the boxer engine had two turbochargers with charge-air cooling at its disposal. The enlarged 3,211 cm³ engine put out a whopping 621 kW (845 hp). After a long period of dominance, pulled out of the World Endurance Championship in 1978, and the Moby Dick was retired after only a few races. At the 24 Hours of Le Mans, the car hit an incredible speed of 366 km/h on the Mulsanne straight. Manfred Schurti and Rolf Stommelen finished the race in an outstanding eighth place overall.

The secret to the success of the 956 lay in the perfect interaction of the aluminum monocoque, the efficient turbo engine, and revolutionary aerodynamics.

The 1982 season was all about new records: at the 24 Hours of Le Mans, beyond sweeping the top five places, cleaned up in almost every class and special classification. The top three places went to the Type 956 developed for the new Group C rules, the first race car with an aluminum monocoque chassis and ground effects. Starting in 1983, also made the 956 available to private teams, which drove it successfully alongside the factory team. Victories in every race of the World Endurance Championship as well as the win in the Manufacturers’ World Championship in 1983, 1984, and 1985 underscore the dominance of the 956. The secret to the race car’s success lay in the perfect interaction of the aluminum monocoque, the efficient turbo engine, and revolutionary aerodynamics, which put the 956 in a class of its own for several years running. Anticipating the FISA (Fédération Internationale du Sport Automobile) regulations due to come into effect in 1987, began developing the 956 into the 962 starting in 1984. The types 956 and 962 also introduced a technical revolution known as PDK: the double-clutch transmission. 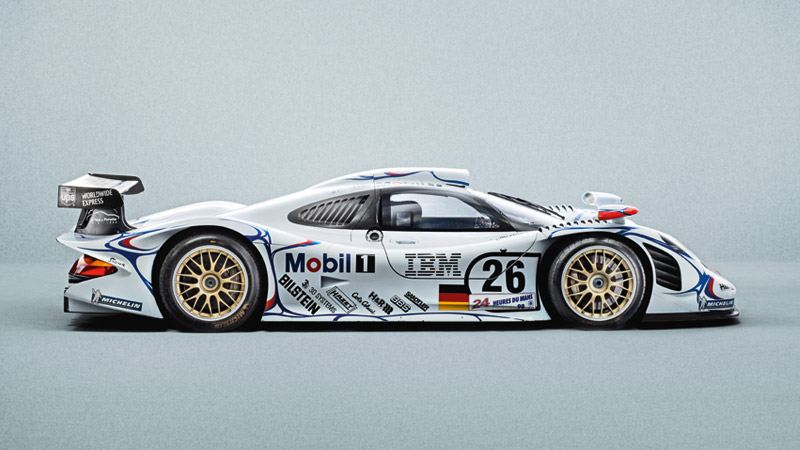 The 911 GT1 from 1998 was the first with a carbon-fiber chassis. It also had a water-cooled six-cylinder boxer mid-engine.

For factory and customer team use on the GT racing circuits, the 911 GT1, developed in the mid-1990s, had its racing debut in 1996. The GT1 was the first 911 to feature a water-cooled mid-engine, which yielded aerodynamic benefits in addition to a balanced axle-load distribution. Behind a TWR- WSC 95 from the Joest team, the new GT race car promptly took second and third overall at the 1996 Le Mans and posted a one-two finish in the GT1 category. At the 1997 Le Mans, both 911 GT1s dropped out with technical problems shortly before the finish line. A year later, entered a modified version of the 911 GT1, the first sports car with a carbon-fiber chassis. With its carbon- fiber-reinforced plastic monocoque, a modified front suspension, and weight-savings in the battery and generator, the 911 GT1 98 shaved some 50 kilograms off the weight of its predecessor. And thanks to optimized engine management, consumption was reduced again. Another new feature was the three-disc racing clutch made of carbon fiber. Fittingly, for ’s fifty-year anniversary, the company posted a one-two finish at the 24 Hours of Le Mans with the 911 GT1 in 1998.