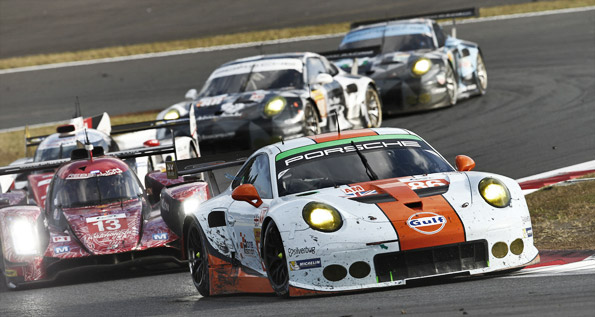 Stuttgart. customer teams are continuing on their successful path in the Sports Car World Endurance Championship WEC. After Abu Dhabi Proton Racing’s GTE-Am class win in Mexico City, KCMG went on to clinch second in Austin and secured another podium spot on Sunday in Fuji, Japan: works driver Wolf Henzler (Germany), Christian Ried (Germany) and Joel Camathias (Switzerland) crossed the finish line in third in the 470 hp 911 fielded by the team from Hong Kong. Rounding off the fine performance from customer squads on the 4.563-kilometre racetrack at the foot of Mount Fuji, Gulf Racing claimed fourth place with Abu Dhabi Proton Racing finishing on fifth.

In the fiercely contested GTE-Pro class, the works drivers Richard Lietz (Austria) and Michael Christensen (Denmark) were unable to join in the fight for the top places. The pair ultimately brought home seventh place in the 911 RSR run by Dempsey Proton Racing.

Comments on the race
Wolf Henzler ( 911 RSR #78): “We can be pleased with third place. Our team once again fought a great fight and thanks to fast pit stops the squad kept us in the race for a podium spot. Unfortunately we weren’t able to go for victory at the end, we were simply a little too far off the leader. I hope that we can be back up there at the next race in Shanghai. I’m very confident about this.”
Christian Ried ( 911 RSR #78): “A podium result twice in a row is not too bad. If we could just find a few tenths of seconds we might even secure our first win of the season in one of the two remaining races. But to do this everything has to come together perfectly.”
Joel Camathias ( 911 RSR #78): “That was a great race for us. We’d planned on a podium spot. Our strategy was good, but unfortunately we couldn’t put any more pressure on the frontrunners. We aim to make up for it in Shanghai.”
Patrick Long ( 911 RSR #88): “The beginning of the race was really difficult for us. We experienced a minor problem and as a result we lost touch to the top guys. Then we fell further back after touching another competitor. Afterwards it was simply a matter of getting over the line.”
Richard Lietz ( 911 RSR #77): “Today was rather sobering. We simply didn’t get to grips with our tyres – in one stint they were good, then poor in the next. So it was virtually impossible for us to find a good balance for our 911 RSR.”
Michael Christensen ( 911 RSR #77): “Unfortunately, the result speaks for itself. Now we have to stay motivated for the last races in Shanghai and Bahrain. Maybe we’ll experience something like a small sense of achievement there.”

Round eight of the Sports Car World Endurance Championship WEC will be contested in Shanghai/China on 6 November.