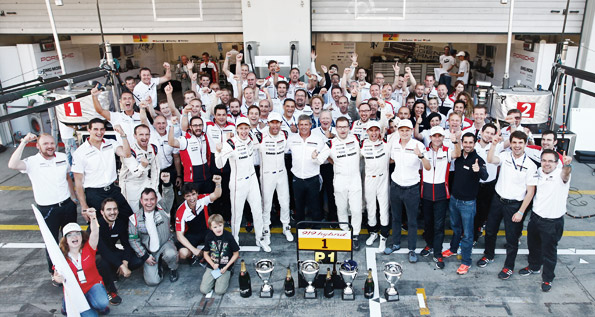 Stuttgart. The reigning world champions Timo Bernhard (DE), Brendon Hartley (NZ) and Mark Webber (AU) repeated their last year’s win at the six-hour race at the Nürburgring (DE). By doing so, , with the 919 Hybrid, extended their lead in the manufacturer standings of the FIA World Endurance Championship (WEC). Romain Dumas (FR), Neel Jani (CH) and Marc Lieb (DE) came fourth in the race and continue to lead the drivers’ world championship. Just like the 2015 debut, the German round of the WEC was a success: 58,000 spectators witnessed breathtaking motorsport in nice summer weather in the Eifel mountains. It was the fourth of nine rounds of the 2016 WEC.

This is the third victory this season for the 919 Hybrid, after wins at the Silverstone and Le Mans races. In total the prototype has won ten races since its 2014 debut. For Bernhard/Hartley/Webber it is their fifth success. now leads the manufacturers’ standings with 164 points ahead of Audi (129) and Toyota (97). Dumas/Jani/Lieb lead the drivers’ standings by 33 points.

How the race went for car number 1:

Immediately after the start Timo Bernhard overtakes the number 8 Audi and improves from third to second. From the 15th lap onwards he attacks the leading number 7 Audi but cannot overtake. Only when the first pits stops are due, the number 1 takes the lead. When refuelling, changing tyres and drivers after 31 laps, the crew works faster than the competition. Now Brendon Hartley is leading the race but is put under pressure. On lap 45 and 48 respectively, he is overtaken by the two Audis and drops back to third. The team identifies a tyre pressure loss and calls the car in for an early stop. After 53 laps Hartley hands over to Mark Webber who passes the leading car on to Bernhard after 86 laps. Short after half distance the race’s third “full course yellow” is in operation, this time both cars pit. After 108 laps Hartley gets behind the wheel again. The title defenders are running in P2. When the course is “yellow” for the fourth time, after 139 laps, Webber takes over again and leads the race. After 165 laps, at a pit stop during full course yellow number five, Bernhard jumps in again to bring home the winning car after 194 laps.

How the race went for car number 2:

Neel Jani holds fourth at the start. On lap 22, in turn one, he attacks the third placed Audi number 8. He almost gets past him but then loses the rear under braking and slips off the track. However, he continues in P4. After 30 laps Marc Lieb jumps into the car. When the sister car has its slow puncture and the Audis have their next pit stops, on lap 57, Lieb takes the lead. After 62 laps he hands over to Romain Dumas. When 91 laps are completed, the number 2 trio benefit from the second “full course yellow” for another pit stop and driver change. Jani continues with the leading car. At the stop after 108 laps, during the third “full course yellow”, an unhappy stint for Lieb begins. On lap 138 he touches the GT (number 88) when he wanted to lap the car. From lap 139 Jani continues with a new nose cone in P2 and is soon in the lead again. After 147 laps he has to take a drive through penalty for the earlier collision and drops back to P3. On lap 156 he tries to overtake the number 8 Audi but is pushed outside the track limits. Then Jani finds himself in a sandwich between the two Audis. A thrilling battle for positions two and three develops – touching cars included. The next pit stop follows during full course yellow number five on lap 165. An unscheduled stop for rear repairs was ordered by race control after 172 laps. Jani continues and finishes in P4.

Michael Steiner, Board Member Research and Development, AG: “It was a hard race, we were fighting for a long time, and I’m very happy about this win on home soil.”

Fritz Enzinger, Vice President LMP1: “It is incredible. We have won nine out of the last ten races, including the 24 hours of Le Mans twice. With this result we are going into the summer break and you cannot ask for more. I feel sorry for our number 2 car. It had the win within reach, too. But a fourth place is still a strong result. We saw a fantastic race and motorsport at it’s highest level, now we look forward to Mexico. Until then I wish all team members here and at home in Weissach a wonderful holiday.”

Andreas Seidl, Team Principal: “A huge compliment to all team members at the track and in Weissach for this outstanding performance. Crew number 1 was able to exploit the full potential of our 919 Hybrid and they were nearly incident-free. Their slow puncture did not cause an extra pit stop. Unfortunately, car number 2 had some unlucky incidents on the track that cost them a top position. We improved our points advantage in the constructors’ championship and crew number 2 collected some valuable points for the drivers’ world championship as well. Getting the season’s third aero package ready for this race was done with huge effort since it was developed at the same time as we prepared for Le Mans. The new package worked well over the entire weekend. We clearly had the fastest car in the race and we want to keep the momentum for the races to come overseas.”

Timo Bernhard (35, Germany): “At the start I managed to improve to P2 and kept putting pressure on the leader. During my first stint I was next to the Audi two or three times. I even overtook him once but missed my braking point because I was focussed on the GT traffic. That allowed him to pass me again. On my second stint I was the fastest car on track and we could make up some time. The final stint was a lot of work as well. To me this win today tastes especially sweet. It was hard fought, for me it is another one on home turf and it helps make up for the bad luck we had in the first three rounds of the championship.”

Brendon Hartley (26, New Zealand): “Thanks to , to the mechanics, the engineers, Timo and Mark – it feels great to be back on the top of the podium. Early stages of the race were good and we overtook the leading Audi in the first pit window because our crew was faster. Then we had some bad luck with the traffic and got a slow puncture that lead to an early stop. With my second stint I was a lot happier. The track was coming to the car in terms of balance. I pulled away from the Audi and then we took the lead of the race.”

Mark Webber (39, Australia): “I’m very happy for winning their home race. It was an exceptional performance against strong competition. This is the day of the mechanics of car number 1 who had some tough times recently and it is good points for the constructors’ championship. We had completely different track conditions in the race than we saw before and I was very happy with the performance of our car and our driving. It was a bit of a mixed up race. We lost some time in a full course yellow period when the car in front of me wasn’t going 80 km/h as the regulations say. Then our sister car had a drive through penalty. We had great battles on track with Audi and I was never bothered which of our cars did it, but the most important thing to me was to beat Audi today.”

Romain Dumas (38, France): “I went in the car just before a full course yellow period and lost some time because I had a car in front of me that was slower than 80 km/h. The second full course yellow came at the right moment giving us a huge advantage. Our 919 was good and we wished for a better result but in the end we scored some championship points.”

Neel Jani (32, Switzerland): “Today we could have won that race. In the beginning it was very hard with position fights everywhere. When a full course yellow brought us to the top, luck was on our side – later it worked against us. After the contact while overtaking I got into the Audi sandwich and things got difficult for us. It was nearly impossible to overtake them on the straight. I saved all my boost, but I couldn’t crack them. Then a true bumper-car festival started. But fourth place is better then nothing, and the points are highly welcome for the championship.”

Marc Lieb (36, Germany): “Traffic was really difficult today since you always need a little luck where on track and you’re going to meet the slower cars. Our car was good. I feel sorry for the team because of the drive through penalty. It was one of those situations in traffic in which you decide either right or wrong. I got it wrong when I tried to use a gap. I thought he would leave me some room. It is a shame because we had a fairly good chance to win that race and I also feel sorry for the colleagues of the number 88 car.”