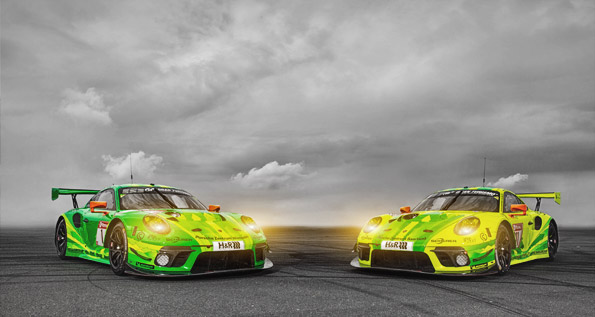 Motorsport News, Preview, Nürburgring 24 Hours 2019, Germany, Preview
aims to defend its title in the Eifel with the new 911 GT3 R

Stuttgart. The customer team Manthey-Racing tackles the 24-hour race on the Nürburgring on 22/23 June as the title defenders. After last year’s victory with the works drivers Richard Lietz (Austria), Patrick Pilet, Frédéric Makowiecki (both France) and Nick Tandy (Great Britain), the experienced squad from Meuspath are now aiming for the seventh overall victory. In the top SP9 category for GT3 cars, seven 911 GT3 R vehicles have been entered under the four customer teams Manthey-Racing, Frikadelli Racing, IronForce by Ring Police and Falken Motorsport. A total of 45 race cars from are on the entry list.

Five of the seven 911 GT3 R represent the latest generation of the 500+hp GT3 car from Weissach, which was unveiled at last year’s 24-hour race at the Nürburgring. The goal for the customer sport racer, which has already underlined its great potential at the Nürburgring long-distance championship (VLN), the North American IMSA WeatherTech SportsCar Championship, the Blancpain GT Series and the ADAC GT Masters, is to build on the successes of the previous model at the “Green Hell” classic.

“Defending the title is on this year’s agenda. This task began on the very same day we clinched victory in 2018,” says Sebastian Golz, Project Manager 911 GT3 R. “To date, our new GT3 vehicle has clocked up more than 25,000 kilometres on the Nordschleife. The strength of the 911 GT3 R lies in its consistency over long stints. Our customer teams Frikadelli Racing, Falken Motorsport, Ring Police and Manthey-Racing have contributed significantly to making the overall package competitive. We now want to turn that into a top result at the 24-hour race.”

The ADAC TOTAL 24-hour race will be contested on a 25.378-kilometre combination of the Grand Prix circuit and the Nordschleife northern loop. “It’s like a winding country road. But as opposed to road traffic, maximum speed is permitted on the Nordschleife – it’s huge fun,” says title defender Richard Lietz. “The most extraordinary thing is that you have to inch your way closer to the limit every single lap. The conditions often change in the different track sectors, the traffic is unpredictable, and the fuel consumption alone changes the behaviour of the car on each lap,” explains Frédéric Makowiecki.

The winners of the 2018 24-hour race will take up the challenge in the 911 GT3 R with the starting number 1. works drivers Earl Bamber (New Zealand), Michael Christensen (Denmark), Kévin Estre (France) and Laurens Vanthoor (Belgium) share the cockpit of Manthey’s identical No. 911 sister car. “This race is one big adventure,” says Michael Christensen. “The weather always plays a major role, and the traffic situation is often tricky. It’s a huge challenge that we love to take on. When you drive for Manthey-Racing, there can be only one goal: first place!”

With six overall victories, including four in a row from 2006 to 2009, Manthey-Racing is the most successful team at the 24-hour classic, which has been contested in the Eifel since 1970. The crew under the brothers Martin and Nicolas Raeder fields a third 911 GT3 R. Otto Klohs shares driving duties at the wheel of the 2018-spec vehicle (No. 12) with the Young Professionals Dennis Olsen (Norway) and Matteo Cairoli (Italy) as well as development driver Lars Kern (Germany).

assists it long-standing partners with technical support and drivers. The No. 44 car campaigned by Falken Motorsport is manned by works drivers Jörg Bergmeister and Dirk Werner (both Germany) as well as the Austrians Martin Ragginger and Klaus Bachler. Joining forces in the new 911 GT3 R run by Frikadelli Racing (No. 31) are the works drivers Romain Dumas (France) and Sven Müller (Germany) as well as the Young Professionals Mathieu Jaminet (France) and Matt Campbell (Australia). The previous season’s car with the number 30 is driven by team owner Klaus Abbelen, Alexander Müller and Robert Renauer (all from Germany) and the Young Professional from Austria, Thomas Preining. Jan-Erik Slooten (Germany), Steve Jans (Luxembourg), Adrien de Leener (Belgium) and Lucas Luhr (Germany) take up the competition for IronForce by Ring Police in the No. 8 car.

An overview of the cockpit crews (SP9 class)

The 911 GT3 R was newly developed for the 2019 season. Improvements in the areas of aerodynamics and kinematics were systematically implemented from the insights garnered from the many race outings of its predecessor. The six-cylinder engine in the rear of the GT3 customer racer produces over 368 kW (500 hp). The successful predecessor vehicle has netted many victories in international racing series, including the IMSA SportsCar Championship, the World Challenge, the ADAC GT Masters, the 24-hour race on the Nürburgring and the Bathurst 12-hour race.

The 24-hour race on the Nürburgring is contested on 22-23 June and starts at 3.30pm. The free-TV station RTL Nitro broadcasts the top qualifying (21 June, 19:00 hours) as well as the entire race live. The Eifel classic can been viewed free-of-charge via live streaming on the internet website www.24h-Rennen.de as well as on numerous motorsport web portals.