A very special summit: Four Le Mans winners at one table. The span of forty years between the victories in 1970 and 2010 offers up plenty to talk about, from technology and tactics, feeling and danger, to exhilaration and sporting achievement.

Romain Dumas: Wow, Hans, driving at Le Mans in the 1970s—that must have been quite an adventure. I love these old cars. They were difficult to control. In those days, the driver faced different challenges and was on his own. Today’s requirements are more varied. The race cars are very technologically advanced; the driver has to perform various functions at once.

Timo Bernhard: You also had more calm and freedom in the cockpit and could drive the way you thought was best. There was almost no communication with the pit. Today the focus is much different. We have more than twenty buttons on the steering wheel and have constant contact with the pit.

Hans Herrmann: I’d go crazy with all of those buttons.

Bernhard: And really, no one interfered?

Herrmann: We had more influence and didn’t receive any instructions. It wasn’t even possible technically. We had to feel everything ourselves and pace ourselves. A good example is Le Mans in 1969. Over the final hour and a half, Jacky Ickx in a Ford GT40 and I overtook each other at the front two or three times per lap. My front brake pads were shredded. I could have made a pit stop, because the guy in third was two laps behind. It was completely up to me. I thought Jacky could have a problem, too. So I stayed out there.

Richard Attwood: In our day the team management didn’t have a clue what we were doing out there.

Bernhard: Today the pit determines the strategy and the driver is transparent. The telemetry continuously monitors the car. After a setup change they ask you, “How was it?” It’s incredibly important that you feel the car. They check out everything we say.

Herrmann: That puts a lot of pressure on you.

Dumas: Well, I don’t know. You two were charged with getting ’s first overall victory at Le Mans in 1970—I’d say that’s enormous pressure! But then again, the driver was in control. What he said about the car was fact.

Herrmann: As I said, I wouldn’t like all the buttons, but I envy you guys for some of the other technical advancements. Starting with the suits. Or the safety measures, for example. People often ask me, “Would you drive today?” And I say, “Absolutely!” There’s a lot of money and very little risk. We had little money and a lot of risk. At the starting line you’d think, I wonder whose number is up this time?

Dumas: It’s not about the money; motor racing is a passion. Some people even pay to do it. 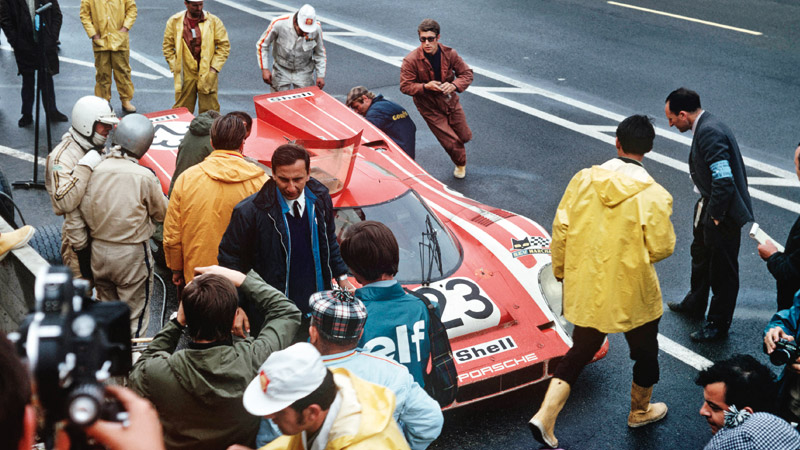 “Many things just can’t be compared. Shifting, steering, braking—it was all a lot tougher back then. But you guys have much higher centrifugal forces to contend with.” Richard Attwood

Attwood: Of course it was more dangerous in our day, even just the courses. Today there are chicanes, guard rails, run-off areas. But for me and my era, building the chicanes on the Mulsanne straight spelled the end of Le Mans. That long straight was what made the race! For 50 seconds you had time to relax—even though that sounds ludicrous at 340 km/h.

Dumas: I have the greatest respect for the drivers of that era. Today we have carbon monocoques, carbon-fiber helmets, HANS [Head and Neck Support], belts. In the race cars of the 1970s, driver deaths were unfortunately all too common. I think that overall the character of racing has changed considerably from how it was when I started twelve years ago. Nowadays it’s a 24-hour sprint, always touch and go. It’s like driving multiple Formula One races in succession. I think the prototype accidents in recent years are due to the fact that we’re always on the rivet.

Bernhard: It’s not only the cars that push the limits; we do too. How was it for you two? Did you have fitness trainers and masseurs? (Hearty laughter)

Attwood: There was none of that. No one told you what to eat, either. How you prepared was completely in your hands. We just tried to make sure we were as fit as possible when we got there in order to do the job right.

Herrmann: I trained at a boxing club in Stuttgart; reaction and quickness were important. There were also drivers who didn’t do anything. Overall everything was rather primitive. We got changed in the truck and if the suits were soaking wet, a mechanic tried to dry them with a heater.

Dumas: It was just the two of you back then. That would be totally crazy nowadays. We drive a sprint for three and a half hours and at the end we’re totally fried. Then we go to the physiotherapist or masseur. And we train a lot. Before the race we have a fitness check, and in the winter two fitness weeks. And I do one marathon per year.

Attwood: Many things just can’t be compared. Shifting, steering, braking—it was all a lot tougher back then. But you guys are much fitter. It’s incomprehensible to me what kind of centrifugal forces you guys have to endure. Up to 4 g! Our maximum was 1 g.

Bernhard: The greater downforce and the wings generate considerably higher lateral acceleration, which creates enormous extra strain, especially on the neck. The straights are almost relaxing by comparison. Our winning car in 2010 had a top speed of 335 km/h. But the car was very stable, thanks to the downforce. On the long straights we barely noticed how fast we were going.

Herrmann: It was difficult to hold the line with the cars. The wind factors were extreme. Just before you brake for the Mulsanne corner at the end of the straight, there’s a slight right bend. There we would just floor it—assuming that the wind allowed you to stay on the left side of the track. Our motto was, Don’t risk anything, just floor it. It sounds weird, but the car became very squirrelly when you let up on the gas. You have to remember that we were incredibly fast. In 1970 you could hit 384 km/h on the Mulsanne straight. But in the race the top speed was 340 km/h. We wanted to make it through 24 hours.

Bernhard: How many times did you actually have to change the brakes during the race?

Herrmann: I don’t remember exactly. But the front brake pads were probably changed at some point.

Bernhard: The carbon-fiber brakes we have today don’t need to be changed. But it’s not just about optimal braking in the corners. You have to keep an eye on your competitors as well …

Herrmann: The difference between us and the slowest cars was almost 100 km/h on the straights. That was quite dangerous, especially at night or in rain or fog, when you couldn’t see what kind of car you were going to overtake.

Bernhard: If I notice someone, I tell my teammates right away, “Look out for the yellow and blue car; the driver doesn’t look too experienced.” That can help you get through the race. At Le Mans you need team spirit. Did you guys warn each other?

Herrmann: No. Every man had to assess the situation on the course for himself. But because in 1970 I already had a lot of experience at Le Mans, I advised Richard to take it easy at the start. “Let the others race off,” I said. You still have to be fast. But we looked after the brakes, the transmission, the rpms. I guess the advice helped—after all, we won. And then the weather. It likes to rain at Le Mans. It’s annoying! 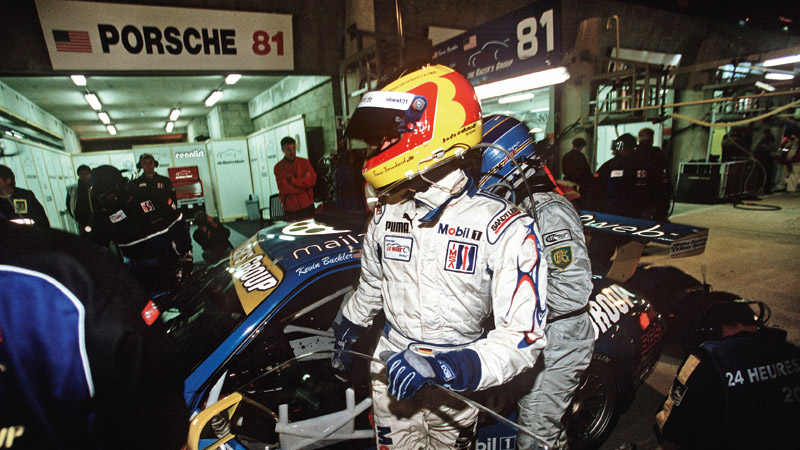 “You had bad tires, cars with a lot of power, and no traction control. Today the asphalt is better, we have good tires, good wipers.” Romain Dumas

Dumas: You can say that again. And for you guys the conditions were even more decisive. Compared to us, you had bad tires, cars with a lot of power, and no traction control. We’re very lucky: the asphalt is better, we have good tire materials, good windshield wipers. In the rain it was totally crazy back then! And at 340 km/h!?

Attwood: 340 km/h—that was out of the question. When it rained hard, sometimes we would drive quite slowly. You had to adapt to the conditions or you’d just lose your grip. And without guard rails, you’d be right in the woods.

Dumas: I imagine that the atmosphere was much different back then. You can see in the old photos that spectators were all over the place. Today, even as a repeat winner of Le Mans, you need the right accreditation and have to go through five checkpoints. But it’s still a great time.

Bernhard: Oh yeah, it’s an unbelievable race. For me, Le Mans is a magical place that combines history and tradition on the one hand with the state-of-the-art hybrid technology of our race cars on the other. It’s an incredible mix, and the fans love it too. You can see that in the number of spectators. Le Mans is the Wimbledon of motorsports. For me, it’s an honor to drive there.

Attwood: Le Mans is and always will be special. This race is a global event.

** Important information about the all-electric models can be found here.