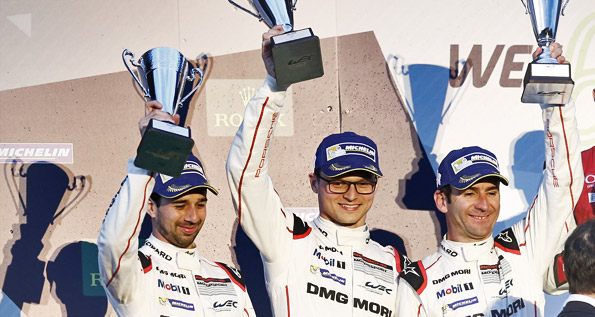 Stuttgart. The second round of the FIA World Endurance Championship (WEC) was a tough test for the Team. Despite a problem with the hybrid system, the trio of Romain Dumas (FR), Neel Jani (CH) and Marc Lieb (DE) finished second with their 919 Hybrid in Spa-Francorchamps (BE) and extended their lead in the drivers’ championship. After two punctures, the sister car of Timo Bernhard (DE), Brendon Hartley (NZ) and Mark Webber (AU) spent more than one-and-a-half hours of the six-hour race in the garage for repairs. In the end it came 5th in the LMP1 category for hybrid cars. In the manufacturer standings leads now with 54 points ahead of Toyota (45) and Audi (41).

The fastest lap of the race, achieved by Brendon Hartley (1:58.431 minutes), gives an idea of what would have been possible for the 919 in Spa. Following the season’s opening race at Silverstone this is the second fastest race lap for ’s Le Mans prototype in 2016. Track temperatures of up to 50 degrees celsius gave much warmer conditions than expected for the race in the Ardennes mountains.

How the race went for car number 1:

Start driver Brendon Hartley builds up a solid lead until his first pit stop after 23 laps. Timo Bernhard takes over with fresh tyres and continues in second position. The number 5 Toyota takes the lead after refraining from a driver and tyre change. Bernhard is faster, a breath-taking battle develops between him and Sébastien Buemi. Bernhard overtakes in La Source, Buemi strikes back in Eau Rouge. Entering lap 37 Bernhard reports a puncture, having seven kilometres to drive before reaching the pits. While bringing the car home, the tyre falls apart and damages the body work. In the pits the front nose is changed, Mark Webber takes over. On lap 45 the front left tyre is damaged again – a result of the first puncture. After a longer stop for repairs Brendon Hartley rejoins the race. When the race is 56 laps old, the number 1 car is four laps down in 14th position when the next pit stop is due. The front gearbox was damaged due to very different wheel speeds of the two front wheels when bringing the car home with the damaged tyres. At 16:38 hrs local time the repair begins. At 18:17 hrs the 919 with Webber at the wheel leaves the pits again, having a 51 laps deficit to the leaders. He does a 24-lap stint before he hands over to Bernhard. The gap to the leaders is now 49 laps. After 137 laps into the race, Hartley jumps in for the final stint, using a safety car period. He brings the car home in 27th place overall and fifth in the hybrid class.

How the race went for car number 2:

Marc Lieb has a good start and follows his teammate in second position. After almost six laps Lieb reports a problem with the hybrid system. Car number 2 cannot use the full electric power for the remaining race distance. After 22 laps Neel Jani jumps into the handicapped car. On lap 47 he hands it over to Romain Dumas before Lieb gets behind the wheel again after 71 laps. At the end of 95 laps Lieb hands over to Jani. Despite the reduced power Dumas/Jani/Lieb are driving in third position because Audi and Toyota have problems with one car each. On lap 113 the leading Toyota number 5 has technical issues as well, Jani is promoted to second. After 118 laps Jani pits and hands over to Dumas who comes for a final refuelling during a safety car period and finishes in P2.

Fritz Enzinger, Vice President LMP1: “The opening round at Silverstone wasn’t easy but here in Spa it was even more difficult, although we were starting from the front row with both cars. Having achieved a second place finish despite the technical problems early in the race on the number 2 car proves again: giving up is never an option in endurance racing. Car number 1 was very unlucky in the race. In the world of theatre people say a bad dress rehearsal is a happy omen for the premiere. This is how we consider our race day in Spa now with regards to Le Mans. We will not leave a stone unturned and painstaking prepare for the 24 Hours. Many thanks to the entire crew here on site and in Weissach for their efforts.”

Andreas Seidl, Team Principal: “Congratulations to Audi for a hard fought victory. It was clear today that all three manufacturers operate their technologies to the limit. For the first time since our LMP1 programme began we now go to Le Mans leading in both world championships, the manufacturers’ as well as the drivers’ standings. For our car number 1 crew it is bitter to be left almost empty handed after two rounds because of massively bad luck in the races. In Silverstone they had an accident, here it was a puncture with huge consequences. Crew number 2 did a superb job despite the early problem with the hybrid system and achieved an almost sensational second place finish. With the new low downforce package we had, again, the fastest car on track. Now we have to improve the reliability in details and get ready for Le Mans.”

Timo Bernhard (35, Germany): “Today we definitely had the pace to win that race. The battle with Sébastien was good fun. Our strategy was alright and I believe I would have left him behind in the end. But in motor sports you just cannot control everything. Most probably I ran over debris in the last chicane where there had been accidents. Then I had to do a complete lap with the damaged tyre and that caused more damage, highly likely including the broken front gearbox. But, whatever, we now fully focus on going to Le Mans for the season’s highlight.”

Brendon Hartley (26, New Zealand): “I had a good start, the car felt fine. In the second half of the stint we had a big tyre drop-off. No one had expected such high track temperatures here. Theoretically we would have had to double-stint a set of tyres later in the race. Unfortunately we don’t know how that would have worked because we were set back by other issues. In the end it was good to bring the car home.”

Mark Webber (39, Australia): “The guys did a great job in getting the car back on track. Again we learnt a lot, but it was a tough day for our car crew. For the team it’s great what car number 2 has achieved despite their problems.”

Romain Dumas (38, France): “In the end I was taking the car round the track really carefully. It wasn’t easy at all today. The championship points are a reward for the mechanics who worked extremely hard here and kept repairing our cars.”

Neel Jani (32, Switzerland): “This was very special today. Without the full power from the hybrid system, traffic is difficult and you have to take care of the brake temperatures a lot. We have been treating our 919 as carefully as we could and then we were repeatedly promoted as others got in trouble.”

Marc Lieb (35, Germany): “It was a bit frustrating not to have the full hybrid power after lap six. We were quite busy in the cockpit driving to finish the race under those circumstances. The car is set up for the strong four-wheel drive when accelerating from the corners. But we managed to bring the car home and were rewarded with big points.”