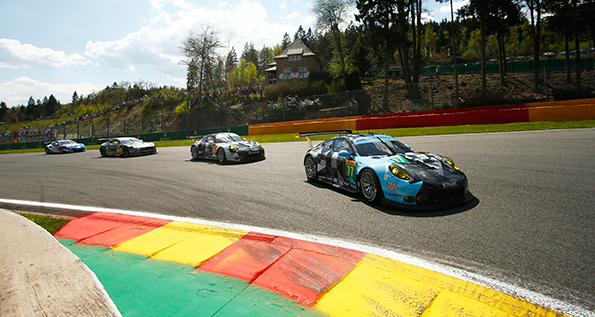 At the six-hour race on the storied racetrack of Spa-Francorchamps, 56,000 spectators watched as the 911 RSR narrowly missed out on its first podium result at the second round of the Sports Car World Endurance Championship WEC. At the wheel of the Dempsey Proton Racing-campaigned 911 RSR, which built based on the seventh generation of the iconic 911 sports car, Richard Lietz (Austria) with teammate Michael Christensen (Denmark) scored fourth place in the GTE-Pro class. In 2015 Lietz won the FIA World Endurance Trophy as the best GT pilot in the WEC.

Patrick Long was even closer to claiming a podium spot. Driving the 911 RSR of the Abu Dhabi Proton Racing customer team, the American was running in position two in the GTE-Am class with three laps to the finish. His spirited chase through the field, however, remained unrewarded: An LMP2 prototype, which was no longer in contention in the race, shunted Long’s car off the track at the end of the finish straight. Long was forced back into the pits and was ultimately classified as sixth with Khaled Al Qubaisi (United Arab Emirates) and David Heinemeier Hansson (Denmark).

In sunshine and spring temperatures in the Belgian Ardennes, the 911 RSR campaigned by the KCMG team also looked to be on track for the podium over much of the distance. In the end, Wolf Henzler (Nürtingen), Christian Ried (Germany) and Joel Camathias (Switzerland) had to settle for fourth GTE-Am place. The 911 RSR run by Gulf Racing finished fifth with the all-British team Ben Barker, Michael Wainwright and Adam Carroll sharing driving duties.

Race quotes
Richard Lietz ( 911 RSR #77): “As expected, it was a difficult race. The balance of our 911 RSR was better than in practice, but the warm weather didn’t play into our hands. We fought hard and did everything we could, but we still weren’t fast enough. Only as the temperature cooled towards the end the race did our performance improve a little. Fourth place, however, earns us important championship points. Now we’ll turn our whole attention to preparing for the Le Mans 24 Hours.”
Michael Christensen ( 911 RSR #77): “In the lead-up to Le Mans every race kilometre and every pit stop is important. That’s the positive outcome of a race in which unfortunately we weren’t able to yield what we had planned. It’s a pity for the team. They supported us so well with quick pit stops. Now we’re all working at high revs towards Le Mans.”
Wolf Henzler ( 911 RSR #78): “After the qualifying we tweaked the balance of the 911 RSR and that had a positive effect. The start was a bit hectic, because just after Le Source a prototype was standing sideways across the track. Luckily I got past okay. I think we performed very well today.”
Patrick Long ( 911 RSR #88): “My day was actually rather relaxed. I drove the first stint and then the final stint... and then it was over with relaxing: A prototype drove into my car shortly before the finish while I was running in a clear second place. I can’t tell you how furious and disappointed I am. I’m so sorry for my teammates Khaled and David who drove a strong race today. The team also deserved a podium result.”

Round three of the Sports Car World Endurance Championship WEC is the legendary Le Mans 24 Hours in Le Mans/France on 18/19 June.