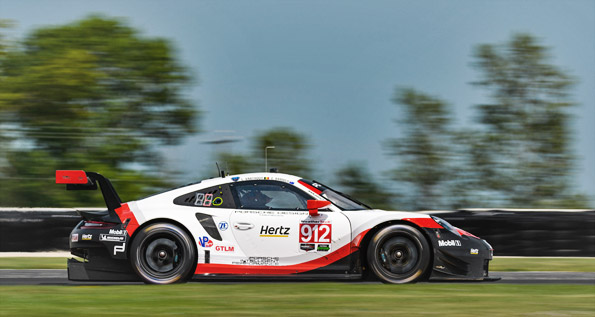 Stuttgart. The GT Team heads to the storied Road America racetrack in the US state of Wisconsin this coming weekend (2-4 August) to contest round eight of the IMSA WeatherTech SportsCar Championship. With five wins and a 24-point lead in the manufacturers’ championship, the team is aiming for more podium results with its works drivers in the number 911 car, Patrick Pilet and Nick Tandy, as well as Earl Bamber and Laurens Vanthoor (No. 912). In addition to the factory squad’s two ca. 510 hp 911 RSR contesting the GTLM class, three customer teams will field three 911 GT3 R in the GTD class. Aside from Park Place Motorsports und Pfaff Motorsports, Wright Motorsports aims to build on last year’s success at Road America. Last year, John Wright’s squad won there. As the winners of the previous round at Lime Rock, Pfaff Motorsports also travels to Elkhart Lake feeling confident.

The race
At 6.515-kilometres in length, the Road America racetrack, which was opened in 1955, is the longest track on the IMSA SportsCar Championship calendar. The racetrack is located two hours by car north of Chicago in Elkhart Lake, a town in the US state of Wisconsin with a population of around 1,000. Traditional road races were held here in the fifties. In 2015, celebrated a one-two victory in the GTLM class at Road America. Last year, ’s works driver Patrick Long (USA) and Christina Nielsen (DK) clinched victory in the 911 GT3 R campaigned by Wright Motorsports.

The drivers
The winners of the Sebring and Watkins Glen races, Patrick Pilet (France) and Nick Tandy (Great Britain), share the No. 911 911 RSR. The pair currently ranks second in the drivers’ classification. Their works driver colleagues in the No. 912 sister car, Earl Bamber (New Zealand) and Laurens Vanthoor (Belgium), lead the class after victories at Long Beach, Mid-Ohio and Bowmanville, Canada. In the GTD class, three 500+hp 911 GT3 R will compete. The customer team Pfaff Motorsports (No. 9) tackles the race with Young Professional Matt Campbell (Australia) and Zacharie Robichon from Canada. works driver Patrick Long (USA) shares the cockpit of the No. 73 vehicle run by Park Place Motorsports with his compatriot Patrick Lindsey. The No. 91 911 GT3 R campaigned by Wright Motorsports is shared by Young Professional Dennis Olsen (Norway) and Anthony Imperato (USA).

The vehicles
For its third racing season in North America, the 911 RSR has undergone further optimisation primarily in the setup. Depending on the size of the restrictor, the engine, which is positioned in front of the rear axle, puts out around 375 kW (510 hp). The large rear diffuser combined with a top-mounted rear wing provides aerodynamic efficiency and significant downforce. The 911 GT3 R fielded by customer teams was newly developed for the 2019 season. Improvements in the areas of aerodynamics and kinematics were systematically implemented from the insights garnered from the many race outings of its predecessor. The six-cylinder engine in the rear of the GT3 racing vehicle produces over 368 kW (500 hp).

The schedule
The race over 2:40 hours takes off on Sunday, 4 August, at 2:35pm local time (9:35pm CEST) and can be viewed live outside the USA and Canada on www.imsa.com.

Comments before the race

Pascal Zurlinden (Director GT Factory Motorsport): “We’re all excited about competing at the Road America racetrack. The course is very fast with several blind sections, which makes it really demanding for the drivers. We’ve haven’t had a lot of success there in recent years. However, we’d like to earn as many points as possible and extend our championship lead even more.”

Steffen Höllwarth (Programme Manager IMSA SportsCar Championship): “Road America is a real drivers’ circuit. That’s why everyone likes to race here. The course is one of the more traditional racetracks and the layout has remained unchanged since the fifties. In our setup, we need to find a good compromise between low downforce on the long straights and high downforce in the tight corners. After our mediocre performance last year, we still have a score to settle at this track.”

Patrick Pilet ( 911 RSR #911): “I have great memories of Road America. The course is one of my favourites on the IMSA calendar. It’s a tricky course for , but we’ve enjoyed a strong season so far. I’m really looking forward to the race and I hope we can improve our points balance in the championship.”

Nick Tandy ( 911 RSR #911): “The racetrack is very fast and fun to drive on. Road America hasn’t been particularly successful turf for in recent years. We have to come up with something as a team. Perhaps the key to success is to implement an unusual strategy. is in a strong position in the overall standings and I feel optimistic for the race.”

Earl Bamber ( 911 RSR #912): “Road America is my all-time favourite racetrack in the USA. It’s fast and packed with challenges. We had some difficulties achieving good results here in recent years, but this season has been going really well. Second place at the most recent race at Lime Rock enabled us to extend our lead in the championship. I’m looking forward to Road America.”

Laurens Vanthoor ( 911 RSR #912): “The 2019 season has gone brilliantly for us so far. We want to defend our championship lead. There are still four races where we can earn points. For this reason it’s important to stay amongst the frontrunners. I’m curious to see if we can perform as well at Elkhart Lake as we have in the previous races.”

Sebastian Golz (Project Manager 911 GT3 R): “Road America is the longest track on the calendar. Drivers particularly enjoy the “Kink”, which is a passage taken flat-out in sixth gear. Our teams have to set the cars up so that the front axle is very stable at high speed to be able to drive through the Carousel corner as fast as possible without understeer. The teams haven’t done much testing with the new GT3 R on this circuit. Nevertheless, we feel very confident that our crews will be able to try a lot through the new ‘setup change concept’ without losing any track time.”

Matt Campbell ( 911 GT3 R #9): “I’m excited about my first outing on the Road America racetrack and I’m looking forward to contesting another IMSA SportsCar Championship race. This time I’m competing for Pfaff Motorsports. They won the previous round at Lime Rock thanks to an outstanding performance with my Young Professional colleague Dennis Olsen.”

Patrick Long ( 911 GT3 R #73): “When you’ve won on a certain racetrack, it’s always a great feeling to return. Last year we won at Road America, which makes it all the more exciting to race there.”

Dennis Olsen ( 911 GT3 R #91): “I’m curious about the Road America racetrack and competing for Wright Motorsports. My teammate will be Anthony Imperato, who drove a great race at Lime Rock. Let’s see what we can achieve together with the team. It would be wonderful to follow up with another win after Lime Rock. I feel fit and very well prepared after the tests.”

This is the IMSA SportsCar Championship

The IMSA SportsCar Championship is a sports car race series that has been contested in the USA and Canada since 2014. The series originated from the merger of the American Le Mans Series and the Grand-Am Series. Sports prototypes and sports cars start in four different classes: GTLM (GT Le Mans), GTD (GT Daytona), Dpi (Daytona Prototype international) and LMP2 (Le Mans Prototype 2). The 911 RSR runs in the GTLM class, and the 911 GT3 R contests the GTD class.