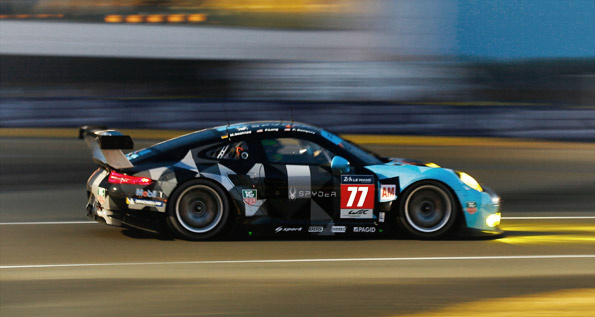 Stuttgart. Patrick Dempsey has celebrated his greatest success as a race driver with at the 24 Hours of Le Mans. At the wheel of the 470 hp 911 RSR campaigned by Dempsey Proton Racing, the American actor (“Grey’s Anatomy”) crossed the finish line in second in the GTE-Am class at the 83rd edition of the long distance classic in France in front of 260,000 spectators. His teammates at his third Le Mans mission with were works driver Patrick Long (USA) and Marco Seefried (Austria), which whom he contests the full 2015 Sports Car World Endurance Championship for the first time.

With the 911 RSR, which is based on the seventh generation of the iconic 911 sports car and is characterised by a consequent lightweight design and sophisticated aerodynamics, the trio put in a strong team effort at their first joint Le Mans campaign. Particularly in the final phase of the world’s toughest automobile race they grabbed their chance: After falling back slightly in the field in the morning, around midday Patrick Long battled his way back to third place. Using the skill and routine from his twelve Le Mans starts, he realized the full potential of the #77 and laid the foundation for success. After putting in a faultless final stint, Le Mans rookie Marco Seefried finally swept over the finish line in second place.

With three-and-a-half hours to the flag, the Manthey squad with drivers Michael Christensen (Denmark), Richard Lietz (Austria) and Jörg Bergmeister (Germany) also looked likely to claim a podium spot with their 911 RSR. Two pit stops for repairs, however, cost the trio more than 30 minutes and the chance of a possible third place. For their team colleagues Patrick Pilet (France), Frédéric Makowiecki (France) and Wolf Henzler (Germany), their Le Mans dreams were shattered already after the first hour of racing due to a defect in the transmission area.

Dr Frank-Steffen Walliser, Head of Motorsport: “Today is a banner day for . We’re all proud of the drivers who clinched the 17th overall victory at Le Mans for . From a GT point of view it’s wasn’t the Le Mans result we were hoping for. We were well sorted in terms of strategy, and we drove a good race with the number 91 vehicle, but then technical problems with our 911 RSR threw us back. It is all the more pleasing that the identically-designed 911 RSR contesting the GTE-Am class finished on an excellent second place with Patrick Dempsey, Patrick Long and Marco Seefried.”

Drivers 911 RSR #91
Richard Lietz: “The week at Le Mans was a rollercoaster of emotions. In qualifying we were just 1.6 seconds behind. The tyres and the heat made my first stint very difficult. But then our 911 RSR gradually improved. The driving was great fun and in the night we were even running in second. But later we experienced bad luck with the shock absorbers but we couldn’t do anything about it. In any case, we’ve learned a great deal. For me, Le Mans is again a very special and unique race. I’m already looking forward to Le Mans 2016.”
Michael Christensen: “My first Le Mans was an unforgettable experience. My teammates had raved about the race beforehand. But all my expectations were exceeded. It’s a pity that the story doesn’t have a happy end this time.”
Jörg Bergmeister: “The race was extremely varied. Although we didn’t quite have the pace we had hoped for, we were looking good in the race for quite some time. We would have been very pleased with a podium finish. Unfortunately technical gremlins prevented this – which can always happen at a 24-hour race. Le Mans was still the highlight of the year for me.”

Drivers 911 RSR #77
Patrick Dempsey: “Le Mans is a wonderful race. It’s always a great experience to compete here. For us, the last race hour was a particularly tough battle but the whole team did everything they possibly could. Luckily we were rewarded with a podium result. For that alone, all the hard work of the last weeks and months were worthwhile. I’m proud of the team.”
Patrick Long: “What a race. My last stint wasn’t easy, the speed that’s driven at Le Mans is incredible. My primary focus was on getting my car home unscathed. If I’ve learned one thing from my twelve Le Mans campaigns, it’s this: In the critical phase your car needs to be intact, only then do you have a chance. This is my third Le Mans attempt with Patrick and we’ve always dreamed of climbing the podium together. Now this dream has come true.”
Marco Seefried: “We experienced many narrow escapes in the race during the final phase. When I witnessed this from the pits I reckon my heart rate must have been higher than when I was in the car. It was my first time at Le Mans. I started with a lot of respect and over the course of the race I gradually worked my way into it. Le Mans is a cool race, but I never thought that such a speed could be maintained over the whole distance. It was tough work and the squad did everything right.”

Round four of the Sports Car World Endurance Championship WEC is held on 30 August on the Nürburgring.