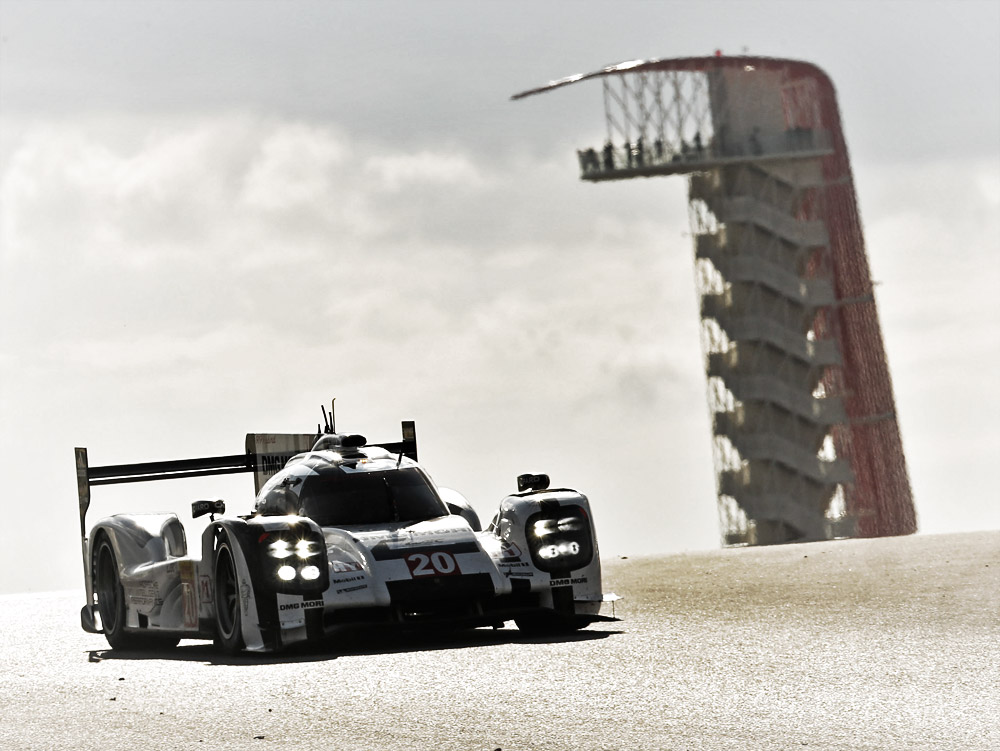 Stuttgart. After a strong qualifying performance and a long time in the lead in the race the two 919 Hybrids only finished fourth and fifth in the six-hour race on Saturday. Car number 14, driven by Romain Dumas (France), Neel Jani (Switzerland) and Marc Lieb (Germany), was leading the race for a long time, but suffered problems at the end and finished just in front of its sister car in Austin, Texas (USA). Timo Bernhard (Germany), Brendon Hartley (New Zealand) and Mark Webber (Australia) brought their number 20 car home in fifth place after an action packed fourth round of the FIA World Endurance Championship (WEC), which was held half at night.

Starting drivers Dumas (P2) and Webber (P3) lost ground in the early stages of the race. They were running fifth and sixth when they came in for their first pit stops. After the first 100 minutes rain set in and led to chaos. On a track that was suddenly flooded half a dozen cars spun off and became stranded, car number 20 with Timo Bernhard at the wheel was one of them. The race was red flagged and stopped for 45 minutes.

At the restart behind the safety car Jani was at the wheel of car number 14, and was third in the race on slick intermediate tyres. He soon took the lead, and after 105 laps handed over to Lieb who went out on slicks. After the final stop for fuel after 133 laps a loss of engine power forced him to drop back to fourth.

Bernhard in the number 20 sister car was able to continue after the red flag and after he had been rescued from the gravel on full wet tyres, but soon changed to slick intermediate tyres as well. On lap 90 he was lying fourth and handed over to Hartley. For the last 30 minutes Webber returned to the car and finally crossed the line in fifth.

Wolfgang Hatz, Board member for Research and Development AG: “Until shortly before the end it was a very encouraging weekend for us in which we were fighting for the race win. The team did a great job and it is a shame it has been unrewarded.”

Fritz Enzinger, Vice President LMP1: “Unfortunately we did not manage to turn the development work of the recent months and the good qualifying result into the amount of championship points we wanted. Similar to what happened in Le Mans, we had chances to get a podium, perhaps even a race win. We will carefully analyse what has led to the loss of power in car number 14 and get prepared for Fuji.”

Andreas Seidl, Team Principal: “The outcome of the race is obviously disappointing. It was hard work and mixed conditions. In the beginning of the race, when it was dry and hot, we could not go at the same pace as the leaders, but in the rain we have been surprisingly strong. For the restart we split strategies to increase our chances. The decision to put slick intermediate tyres on car number 14 enabled us to take the lead. In the end a problem in the powertrain cost us a podium finish.”

Drivers car no. 14
Romain Dumas (36, France): “In the beginning we suffered a bit because of the high temperatures of over 30 degrees Celsius. On a clear lap it was good, but in traffic we had too much understeer.”

Neel Jani (30, Switzerland): “When the rain set in it was completely crazy. Initially it was only wet in one corner, but then suddenly the circuit was flooded everywhere. I came uphill and then just slid away – through a gravel bed, onto the grass and back on track. The decision to restart on slick intermediate tyres paid off. I hoped the track would dry out quickly because of the heat, and then I managed to really take care of those tyres. I was leading by more than half a minute when I handed the car over. Our strategic decisions were all right, the team did a great job.”

Marc Lieb (34, Germany): “This was a tough fight. Romain and Neel did a great job. It was super to take over the 919 Hybrid as the leading car. After my pit stop the engine suddenly lost power and, therefore, I couldn’t defend the lead in the end. The team did a great job in preparing the car, we really deserved a podium.”

Drivers car no. 20
Timo Bernhard (33, Germany): “It wasn’t my day today. My stint began well before the drizzle started. I went for slick intermediate tyres but when I left the pit lane it suddenly became heavy rain. I found myself floating, I was just a passenger. Then for the restart behind the safety car we went on the safe side and took full wet tyres, but this was a disadvantage. Later with the slick intermediate tyres it was all fine. However, that’s racing.”

Brendon Hartley (24, New Zealand): “When I took over from Timo we were already one lap down. The 919 Hybrid has left a strong impression, I enjoyed driving both in the day and night. At some point I hit a big part of debris on the track, which compromised the car’s aerodynamics a bit.”

Mark Webber (38, Australia): “In the beginning it was a good battle with the Audi, but they have clearly been more comfortable in traffic and could easily pick various different lines. Temporarily I also did not have the full boost, but we were able to fix this while I was running. We have definitely learnt a lot in the high temperatures of the early part of the race and also later in the stints.”