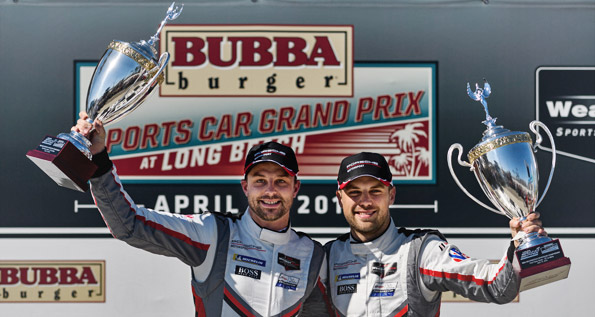 Stuttgart. has won round three of the IMSA WeatherTech SportsCar Championship at Long Beach (USA). At a fiercely-contested city race in California, works drivers Earl Bamber (New Zealand) and Laurens Vanthoor (Belgium) secured first place at the wheel of the ca. 510 hp No. 912 911 RSR. The Sebring winners Patrick Pilet (France) and Nick Tandy (Great Britain) finished fifth in the sister car with the starting number 911. now leads the manufacturers’, drivers’ and teams’ classification in the North American sports car championship.

At the start of the 100-minute race – the shortest on the IMSA calendar – Tandy and Vanthoor defended their lead and managed to gradually pull clear of the field. However, a safety car phase shortly before the halfway point of the race cancelled out this advantage. Initially, both 911 RSR fell back to positions two and three. After the restart, Bamber squeezed past his brand colleague Pilet, and with a spectacular overtaking manoeuvre, the New Zealander then snatched the lead. While the No. 912 car defended the top spot to the flag, Pilet grappled with deteriorating tyres to bring his vehicle over the finish line in fifth place.

In the overall classification, leads the manufacturers’ championship with 100 points. Thanks to the Long Beach victory, Bamber/Vanthoor have moved to the top of the drivers’ classification, with their works driver colleagues Pilet/Tandy sitting in third place. Round four of the IMSA SportsCar Championship will be contested in Mid-Ohio (USA) on the first weekend in May.

Steffen Höllwarth (Programme Manager IMSA SportsCar Championship): “What a thriller! At first everything ran according to plan. We defended the first two positions and managed to eke out an advantage. Ford gambled on the strategy and hoped for a safety car phase – which then eventuated. They took the lead. But our No. 912 car reclaimed the lead and brought it home. The sister car could no longer match the pace on the second set of tyres. We have to take a look at why. Last year Earl and Laurens retired while in the lead, now they’ve made up for that with this victory.”

Earl Bamber ( 911 RSR #912): “That was a really crazy race. Laurens kept our car on P2 at the start. At one point someone hit the rear of the car and we sustained some damage that was worrying. After the pit stop I was running in third. I then overtook Patrick and the leading Ford shortly afterwards. After that it was all about somehow getting the car to the finish. I prayed that the diffuser wouldn’t fall off. It didn’t – I’m pleased!”

Laurens Vanthoor ( 911 RSR #912): “What a huge race. At the start it was really close a couple of times between our two 911 RSR, and we only just managed to dodge a damaged prototype. But apparently there was slight contact. Our rear diffuser was damaged and it couldn’t be properly fixed. Luckily it held until the end. I’m really thrilled about my first win at Long Beach!”

Patrick Pilet ( 911 RSR #911): “Nick got away well at the start and managed to easily retain his lead. We experienced a little bad luck with the safety car and lost the top spot during the pit stop. During my stint I had difficulties with the tyres. Everything was perfect in qualifying, but not in the race. I’m thrilled for my victorious colleagues who put in an exceptional drive despite the defect diffuser. The overall result is good for ’s position in the manufacturers’ classification.”

Nick Tandy ( 911 RSR #911): “The race began really well for us and we were clearly in the lead. Our strategy was also the right one. For some reason we didn’t find our rhythm in the second half of the race. The pace was simply not as good as it previously was and we couldn’t make our way up the field. We’ll now take these points home and are very motivated for the upcoming race.”