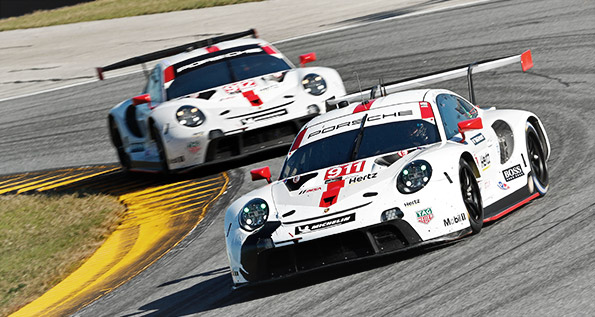 Stuttgart. The new 911 RSR celebrated a successful North American debut with a double podium at the 24 Hours of Daytona. After a strong team effort, the two ca. 515-hp nine-elevens fielded by the GT Team finished on second and third place. , which won the manufacturers’ championship in the IMSA WeatherTech SportsCar Championship last year, is now second in the points after Daytona.

From start to finish, the GT racers from Weissach ran like clockwork at their first 24-hour race. Not a single technical problem hampered the premiere, at which the two new 911 RSR took turns at the lead over most of the distance. In a top-class and gripping end phase, after 786 laps, was just several seconds shy of claiming another victory at the 24-hour classic in the USA after 2014.

The two 911 RSR had already turned heads, qualifying on the first two grid spots in the GTLM class. In the race, Laurens Vanthoor (Belgium), Earl Bamber (New Zealand) and Mathieu Jaminet (France) followed up on this top performance, claiming second place in the No. 912 vehicle, with the No. 911 sister car with the driver trio Frédéric Makowiecki (France), Nick Tandy (Great Britain) and Matt Campbell (Australia) finishing third. With flawless stints, a perfect strategy and swift pit stops, both crews set the pace at the front.

In the final few hours, things turned dramatic on the International Daytona Speedway. In bright sunshine, spectators were treated to a spectacular finale with overtaking manoeuvres and changes at the front. The six works drivers were rewarded with a double podium and their team for a successful weekend, making the outstanding debut of the new 911 RSR perfect.

The customer teams also put in a strong performance at the 24 Hours of Daytona. Wright Motorsports with the American drivers Patrick Long, Ryan Hardwick, Anthony Imperato and the Austrian Klaus Bachler made up many positions in the second half of the race, and managed to finish fourth in the GTD class despite sustaining slight damages to the underbody of their No. 16 911 GT3 R. Behind them, Black Swan Racing also put in a spirited chase through the field to take fifth place with drivers Sven Müller (Germany), Jeroen Bleekemolen (Netherlands), Timothy Pappas (USA) and Trenton Estep (USA) at the wheel of the No. 54 entry. The polesitters from the Pfaff Motorsports team experienced bad luck. After leading over a long stretch, a drive-shaft defect relegated the No. 9 car shared by Patrick Pilet (France), Dennis Olsen (Norway), Zach Robichon (Canada) and Lars Kern (Germany) far down the field, with the quartet ultimately concluding the Daytona 24-hour race on 13th.

Pascal Zurlinden (Director GT Works Motorsport): “That was a perfect debut for the new 911 RSR. At the first race in the USA – and one over 24 hours – we didn’t experience a single technical problem and ended up on the podium with both cars. From the team effort to the strategy right through to the work in the pitlane, everything ran smoothly and flawlessly. At the next race in Sebring, we want to defend our victory from last year.”

Nick Tandy ( 911 RSR #911): “It’s not often that you make it through a 24-hour race without making any mistakes. It’s remarkable and a great start to the season for the new 911 RSR. Even though it wasn’t quite enough today, we’re all the more determined to go all-out and climb to the top step of the podium again in the future.”

Frédéric Makowiecki ( 911 RSR #911): “It was a clean race that we can be proud of. The car ran well from start to finish. Our pit crew did an awesome job. There’s nothing to improve on. Our pace was good, too, but in the end it wasn’t quite enough to win.”

Matt Campbell ( 911 RSR #911): “We pushed hard right from the start, stayed amongst the frontrunners for 24 hours and led for a long time. To kick off the season on the podium with the two new RSR is a fantastic start to the 2020 racing year.”

Earl Bamber ( 911 RSR #912): We fought to the finish and tried everything. Our car ran excellently. However, one of our rivals was slightly faster. I’m still very proud, because the team worked brilliantly together and after 24 hours we’re on the podium with the two new 911 RSR.”

Mathieu Jaminet ( 911 RSR #912): “I have mixed feelings after this race about whether I should be happy or not with second place. We drove a perfect race and maintained a steady pace supported by a highly motivated team. But the competition was a little better and you have to acknowledge that.”

Laurens Vanthoor ( 911 RSR #912): “We had our eye on winning, but unfortunately it wasn’t quite enough. I can’t say what we did wrong. The new RSR ran beautifully, the team and drivers did a great job. I just have to come back next year to finally try to win at Daytona after my successes at Le Mans, Spa-Francorchamps and the 24-hour race at the Nürburgring.”

Patrick Long ( 911 GT3 R #16): “I’m actually quite satisfied with the race. We constantly had to catch up, but we did this very well as a team with the right pi-stop strategy. Towards the end of the race, we lacked the pace compared to the three competitors in front of us. All in all, it was a good start to the season for our team.”