Mark Webber and the new Spyder taking the roads through Buckinghamshire on their way to Silverstone.

Home round with two of the purest roadsters: Factory driver Mark Webber at the wheel of the brand-new Spyder and the legendary 550 Spyder.

The road from Mark Webber’s house, just outside Aylesbury, some 70 kilometers northwest of London, to the Silverstone racetrack is rather dull. You travel mostly in a straight line, and the traffic is always heavy, even when you travel outside rush hour. This circumstance is not encouraging, given it is the only time he has to try the brand-new Spyder. He is on his way to Silverstone to race his 919 Hybrid in the opening round of the 2015 World Endurance Championship.

Mark takes one look at the car, noting its additional spoilers, new rear deck, and lowered suspension. He knows already it has the 276 kW (375 hp), 3.8-liter motor from the S behind him. “Wow, it looks just like a GT’s younger brother,” he says with a huge grin. “I think we’ll go the long way today. Over the years I’ve worked out quite a good route …”

The perfect drive: The morning sun above and the boxer engine behind the driver.

It might seem strange to say it, but many race-car drivers aren’t that interested in cars: to them they are merely the means by which their talent is expressed and victories achieved. Mark Webber is an exception. He loved s long before he was paid to drive them, and has a fabulous collection, from a 1950s 356 Cabriolet to a 911 GT2 RS (997), all acquired before he became a factory driver. “I’ve always loved the shape of sports cars. I drove my first 911 twenty years ago in Sydney, when I was doing Formula Ford, and I guess I’ve been hooked ever since. More recently I remember doing a track day at Paul Ricard with lots of fast cars and F1 and sports-car drivers. And with us guys driving, one by one they just dropped out, either because their brakes were gone or because something had gone wrong with them. At the end there was just this 997 S going round with no problem at all. Tells you all you need to know about the way engineers its cars.”

We have barely left the village before Mark is eulogizing about the . “You have to get the basics right. It doesn’t matter how much performance a car has if the driving position is terrible, or the seat doesn’t hold you properly. This is perfect: the wheel is the right size and shape and has no buttons on it. I need them on my 919, but not here. Nothing is more complicated than it needs to be; everything is designed to let you focus on the driving, and that’s what matters.”

So how does this nine-time winner of Formula One races drive? Expertly, quickly, but with no drama at all. He reaches the speed he wants, and then uses the ’s grip and poise to maintain it. Soon I discover why we came this way: the scenery is beautiful, the roads challenging and completely deserted. Once he takes a strange line through a bend that leads over a blind crest, and as I’m wondering why I notice a substantial pothole just over the brow, which he has missed by millimeters. He knows this road as well as the one outside his house.

There is no radio, no air-conditioning, and no PDK—only the six-speed manual gearbox.

Mark changes gears so smoothly, you might think the car had a PDK transmission instead of a six-speed manual gearbox, so I ask him which he prefers. “Some people think manual transmissions are out of date, others that paddle-shift boxes take the fun away. I genuinely like both. Obviously, we have to use paddles in the race car, and in a normal road car I’d also choose paddles, unless the manual gearbox was amazing.” Then another huge smile spreads across his face, and he shifts down from fourth to third, momentarily opening the throttle by himself: “And this manual is amazing,” he laughs.

As for the engine, the biggest ever fitted to a , Mark is as thoughtful as ever, recognizing at once that it’s not just about the extra power. “What’s remarkable about taking a S engine and putting it in the is the options it gives you. It’ll rev pretty high and gives great power, but because it also has great low-end torque, if you want to drive fast but in a more relaxed manner, you can simply select a higher gear, sit back, and know the engine will still respond as you want at lower revs.”

Silverstone is getting closer now, and, sensing the journey’s end, Mark briefly makes full use of the car’s performance, with the engine howling its approval. It lasts only a few seconds, but it is enough to impress a race-car driver used to being given only the best of the best to drive. “What else can you buy for the same money that can do that?” he exclaims. “This car is quiet and comfortable enough for us to be able to chat all the way here, and then, when you want, provide a level of dynamic involvement that would be pretty rare to find in any car, let alone one as affordable as this.”

History lesson: The 550 Spyder provided the inspiration for the Spyder.

Our journey is over, but the fun has only just begun. Mark may be here to race his 919 Hybrid, but first, sitting by the test track belonging to the Silverstone-based Experience Center, is a history lesson on wheels—nothing less than the car that provided the inspiration for the Spyder.

This 550 Spyder first made its race debut in 1953, where it won its class at Le Mans. The actual car here is a later 550 A, a visually similar but structurally very different car (it had a space frame rather than a ladder chassis), and identical to the car that claimed ’s very first top-level international competition win, at the Florio in Sicily in 1956. In its mid-engine configuration, with its boxer engine, roadster bodywork, and a focus on providing the purest driving experience possible, it is the true inspiration for the Spyder.

Time is short, and knew the importance of a simple and sound driving environment even sixty years ago, which is why Mark is able to simply climb in and drive the Spyder fast immediately. And it helps that he is one of the world’s best drivers. My happy job is to give chase in the .

Two mid-engine sports cars separated by six decades in time but just centimeters on the track.

Mark Webber is a fan, not only since he became a factory driver almost two years ago.

’s circuit at Silverstone is quite tight, so ideally suited to the 550. Even sitting in the , I can smell the racing oil in its incredible four-camshaft 1.5-liter engine, and I expect most of Northamptonshire can hear the crackle of its exhaust as Mark starts to work it harder and harder.

I feared that even with Mark Webber driving, I might not have much work to do behind a car so old and with an engine so small, but I soon realized I had underestimated both the car I was following and the man driving it. The 550 A has been prepared to race at Le Mans, and it’s clear from the speed he is driving, the instant gearshifts, and the way he precisely positions the car around the track that Mark is completely comfortable with the car. Lap after lap we go faster and faster, the smooth snarl of the engine contrasting with the sharp bark of the 550 A motor. Thanks to the power and grip of the , I can keep up, but I am having to work at it, which is exactly as it should be. We get closer and closer, two open, two-seater, mid-engine sports cars separated by six decades in time but just centi­meters on the track.

Too soon our time is up, and Mark heads back to the pits. He’s talking even before he gets out of the car. “That was incredible. I expected it to sound good and even thought it might be quite quick, but the real surprise is how together it feels.”

“If you look at it, you see how well understood the fundamentals of what makes a great driving machine even then. The car is incredibly light even by modern standards, and putting a boxer engine behind the driver is as good as you can get from the point of view of weight distribution and center of gravity. I loved the gearbox, the engine response, the handling balance, and the whole feel of the car. And it has that sense you get in modern sports cars that it could go all day, all night, and all the next day and still be ready for more.”

What didn’t he like, I ask. “The only area in which the car seems its age is the brakes. The drums don’t slow you much, and the pedal feel is not great either. Other than that, it felt years ahead of its time.”

Someone is calling Mark. He has team meetings before the race, and his time with us is over. Just before he leaves I ask him what else, other than their design similarities, he thinks the cars share. “I guess it’s that thing of always thinking about the driver, making life easier, so he or she can concentrate on what really matters, which is getting the maximum possible enjoyment from the driving experience. Drive the 550 and the Spyder, and you’ll know that that focus has been there from the start, and is there, stronger than ever, today.” 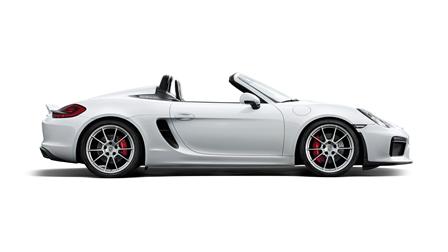 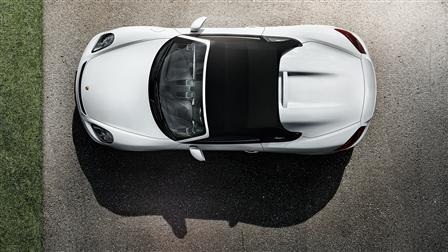 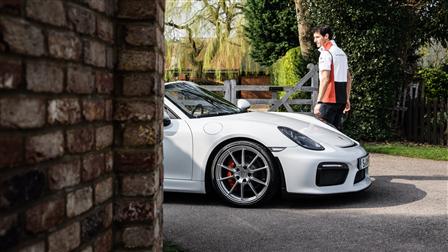 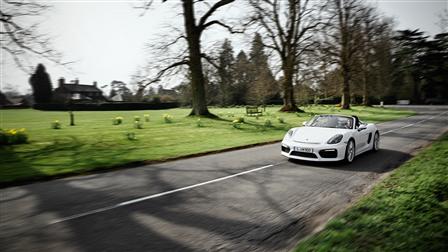 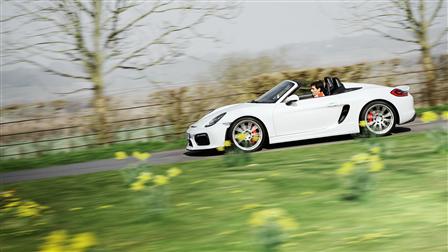 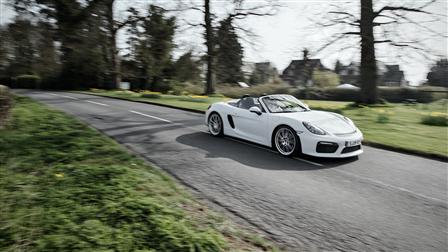 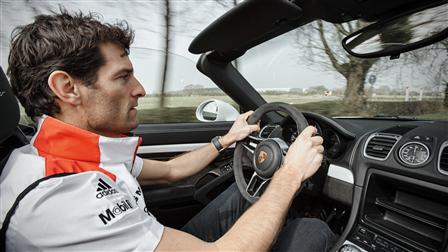 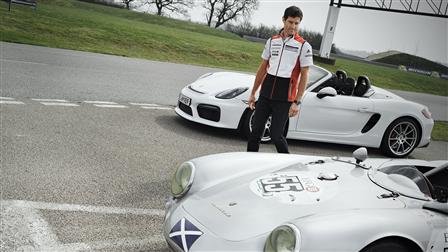 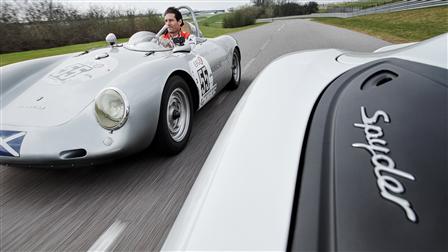 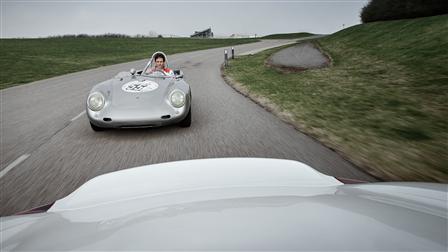 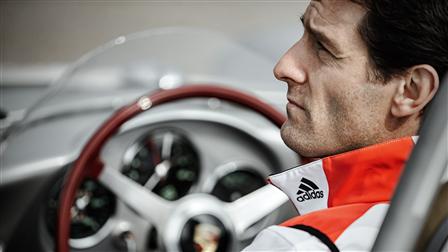 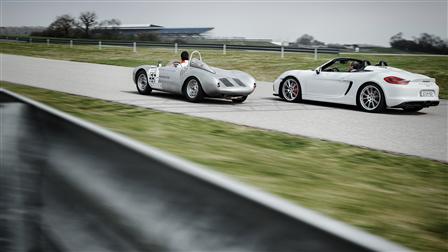 Light, easy-to-operate, and absolutely ready for everyday use: the Spyder’s convertible top.

The Spyder is a purist through and through—a fact manifested not least by  its manual quick-folding roof. Superlight materials such as magnesium, aluminum, and plastic, as well as dispensing with electric top technology, insulation, a roofliner, and acoustic top material save 10 kilograms over the already light top and thus make an additional contribution to the car’s sportiness. At the same time, substantially improved both the day-to-day usability and operation of the top compared to the previous model. The previous emergency top was of limited suitability for car washes; and when the car was closed, it was recommended not to exceed 200 km/h. Both of those issues have  now been consigned to history in the newly developed Spyder top thanks to high-quality seals and the convertible top covering now being attached to each of the lateral bows. Moreover, there is no longer any need for time-consuming removal of the top from the car. While the process of opening and closing the roof is still manual, it now takes less than a minute, thanks to the reduced number of steps (see right), the electric roof closure, and the pneumatic springs on the frame, which lower the force necessary to operate it.

This is how the manual quick-folding top is opened.

The top in the closed position with the characteristic fins stretching far to the back.

Next you open the rear lid and stow the top in the convertible top compartment.

Then the rear lid and, finally, the side cover flaps are closed.

With the top down, the convertible top is stowed beneath the rear lid with the two striking streamliners.