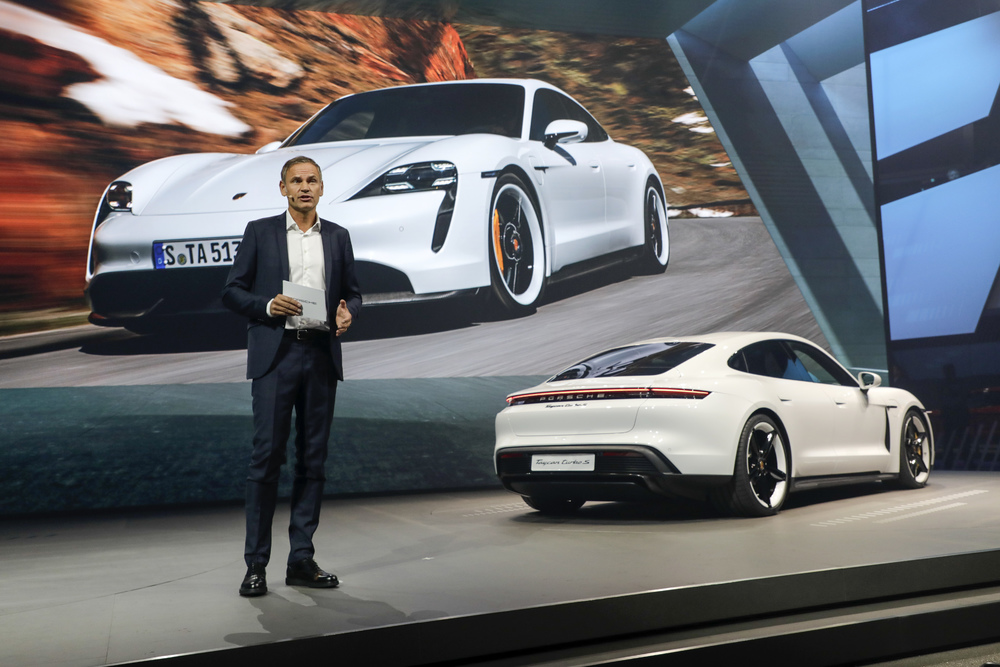 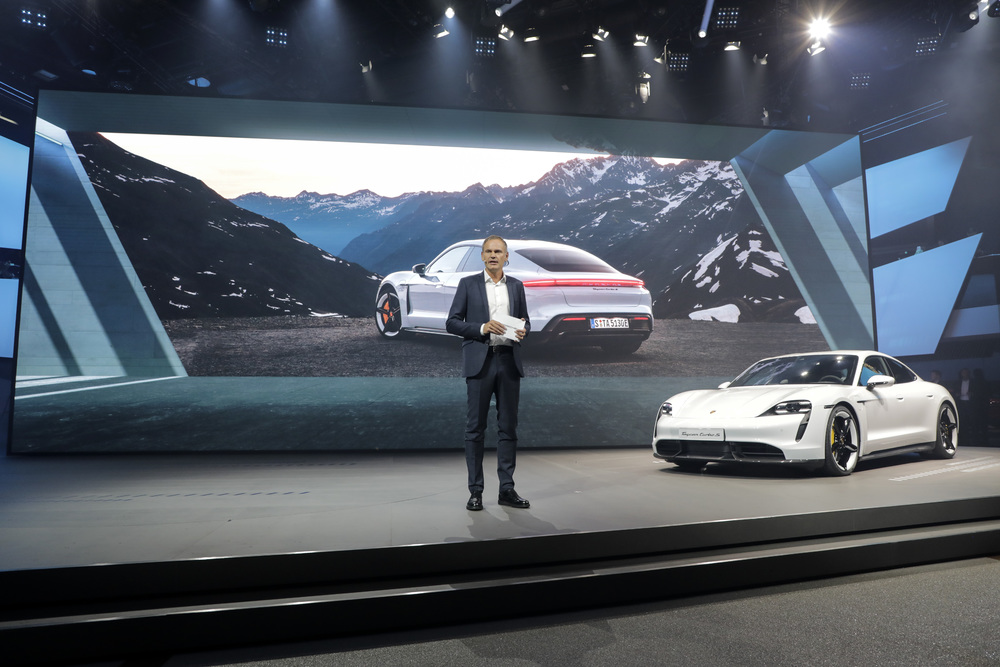 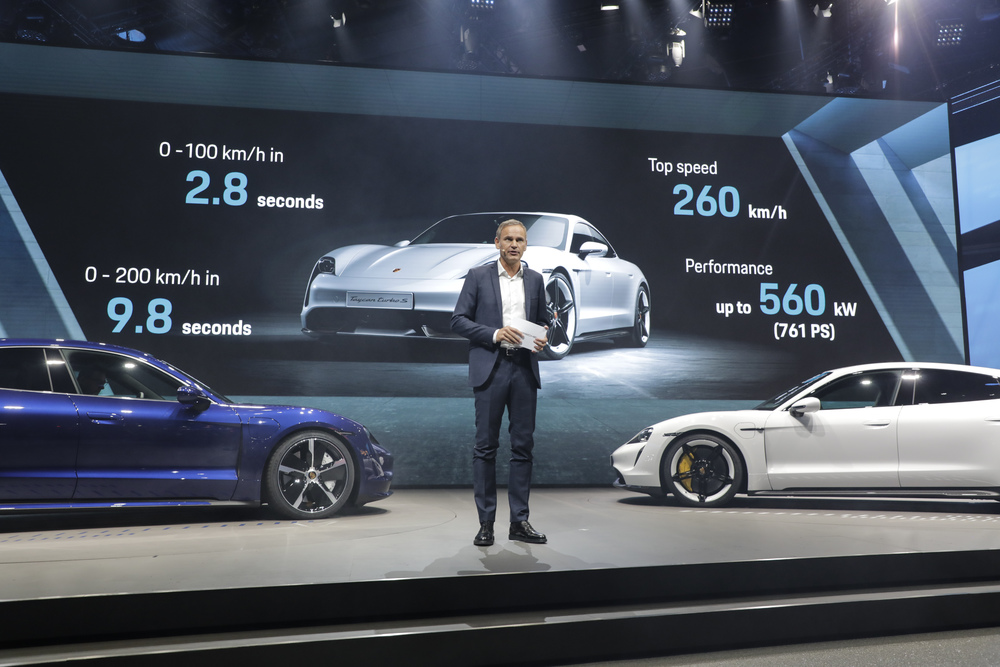 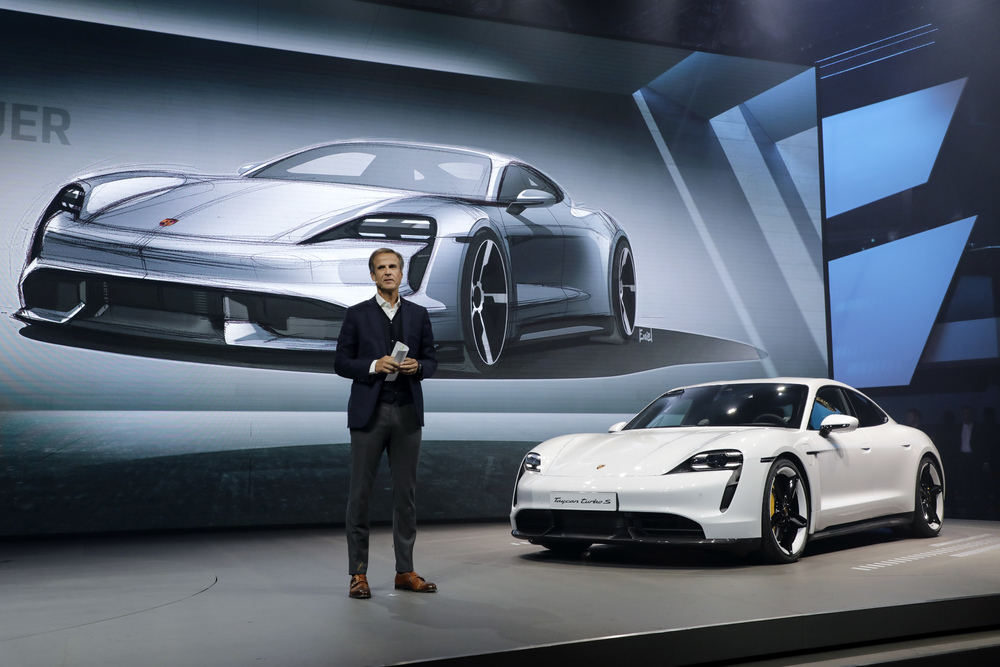 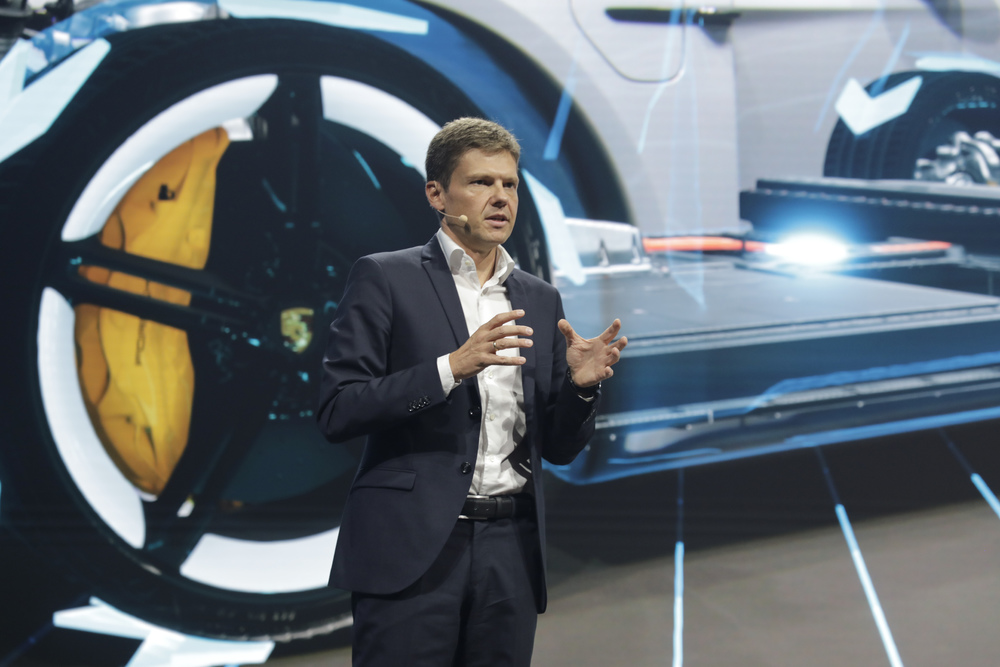 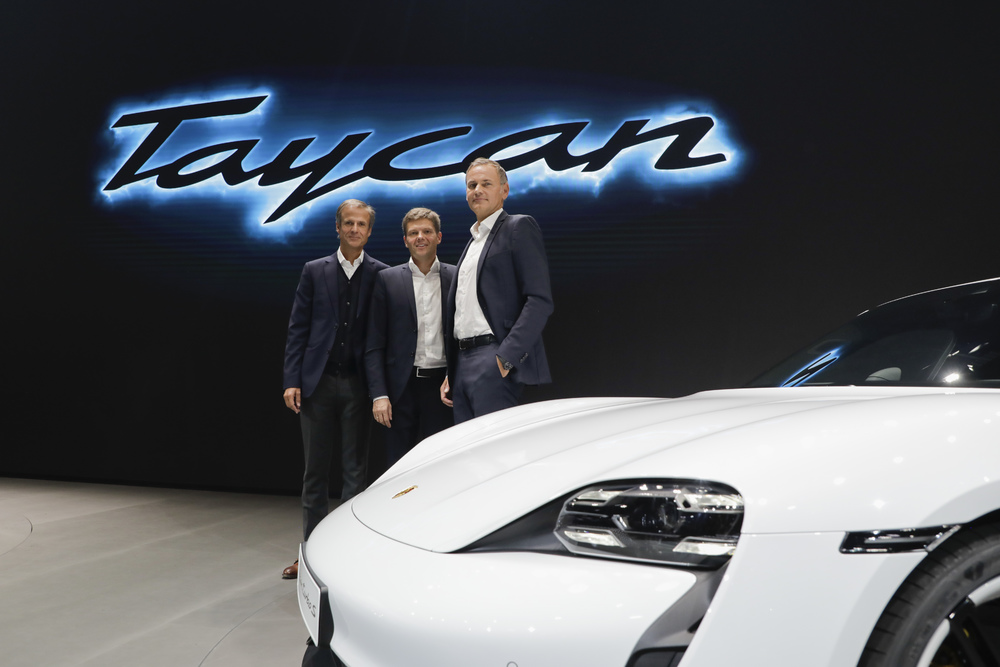 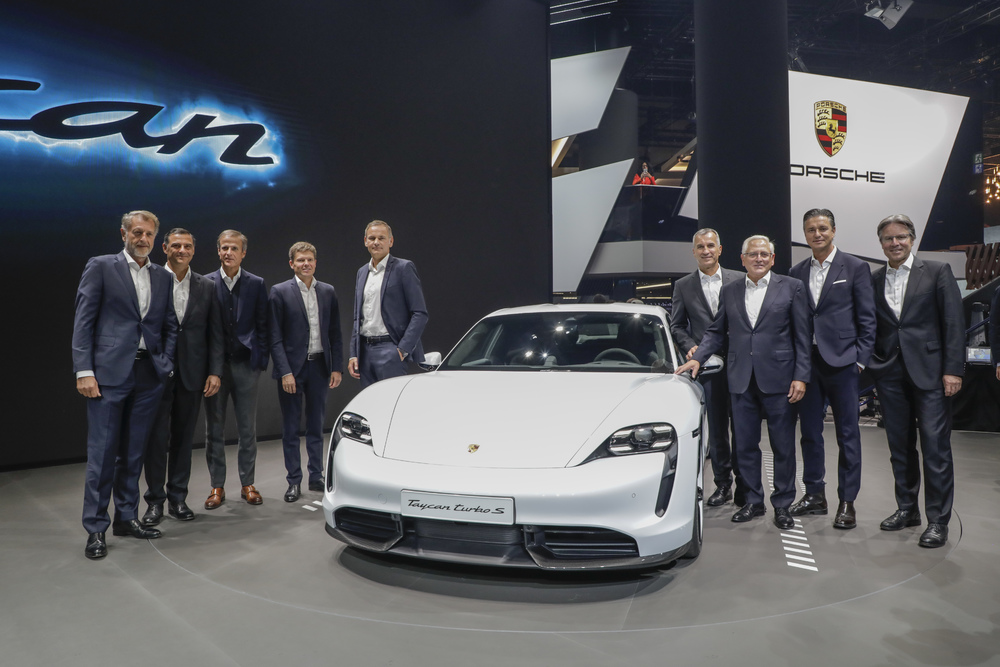 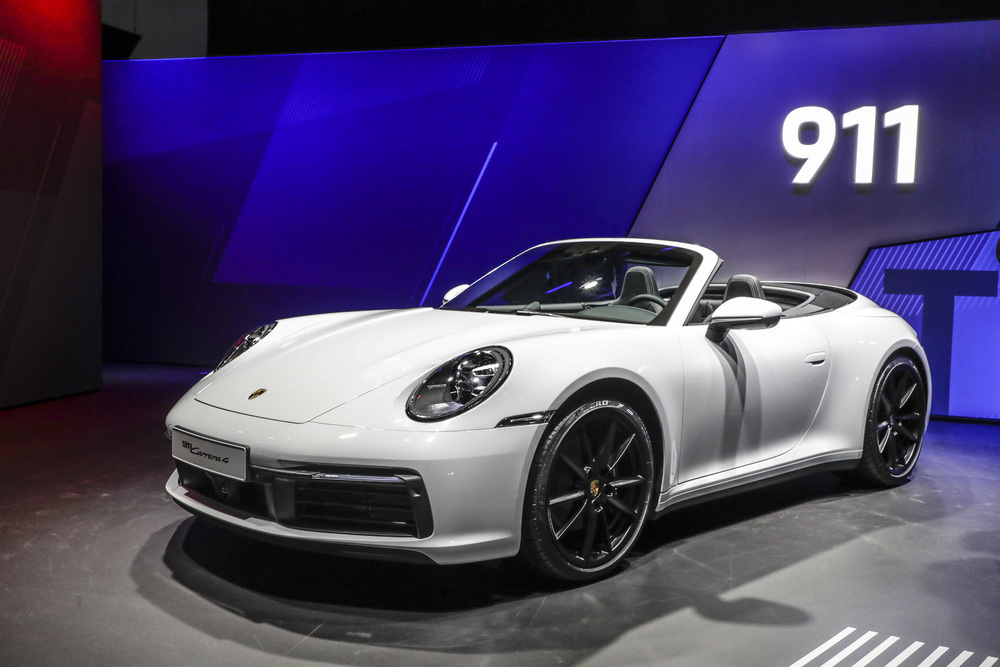 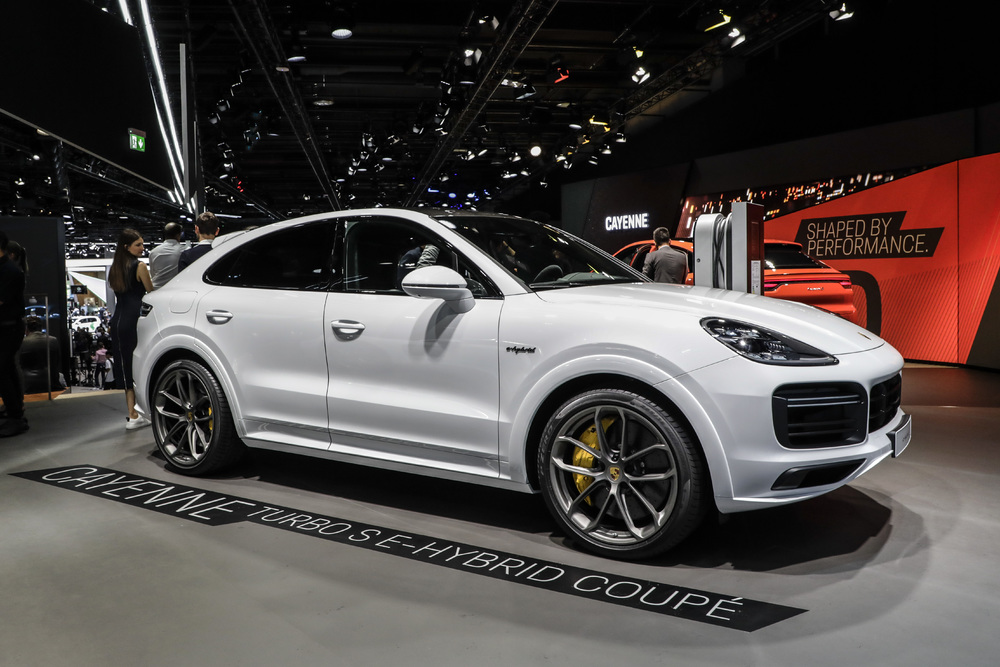 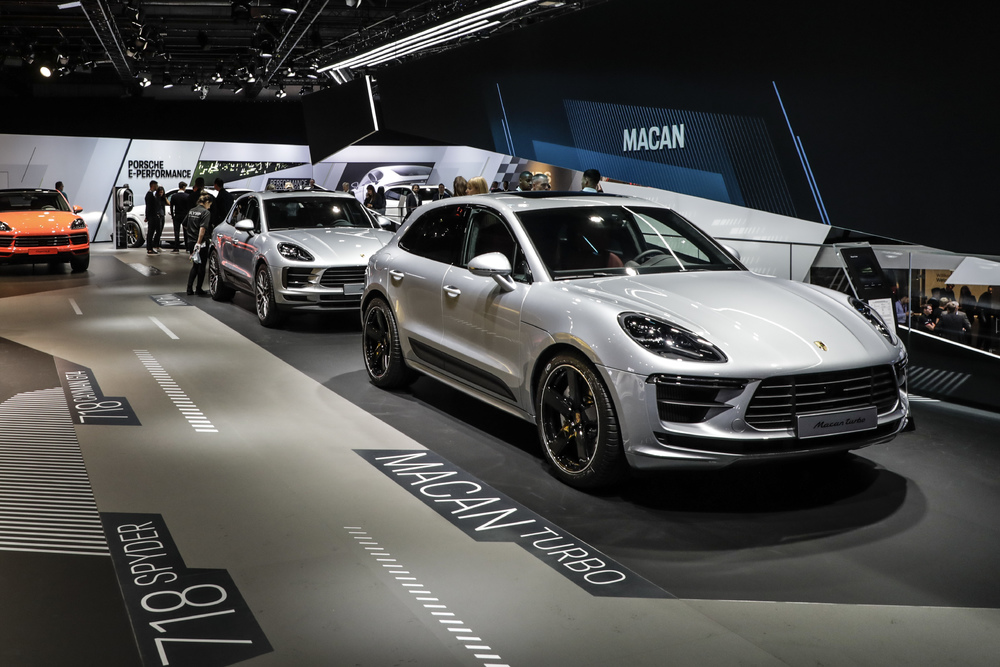 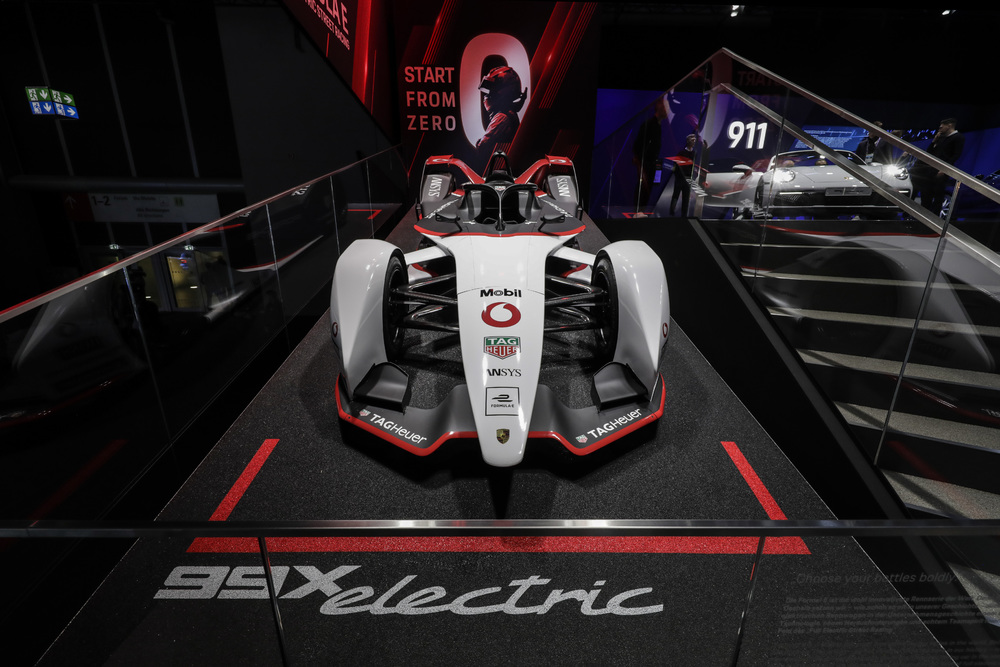 Current photos: New products at the IAA Focus on the fully electric sports car at the IAA

Stuttgart . is presenting eight new products at the 68th International Motor Show (IAA) in Frankfurt am Main which starts today (Tuesday). Current photos of the press conference and at the motor show can be found in the Newsroom at https://newsroom.porsche.de/. A recording of the press conference is also available as Video on Demand (VoD) on the video portal https://newstv.porsche.com.

The focus at the IAA will be on the brand’s first all-electric sports car, the and S. “The redefines ,” says Oliver Blume, Chairman of the Board of AG: “Our goal was to herald the era of electromobility for with the sportiest, most innovative and most emotionally charged vehicle. The embodies all our values. The experience from more than 70 years of manufacturing sports cars.”

To coincide with the start of the motor show, there are also new additions to the 911 family. The all-wheel-drive models 911 4 and 911 4 Cabriolet with 283 kW (385 PS) now extend the product range of the standard 911 model. Other highlights are three new hybrid models in the series: the with a system output of 340 kW (462 PS) as well as the S as and with 500 kW (680 PS). The flagship model of the compact SUV model line, the , is also making its motor show debut. In addition, will also present the vehicle with which the company will enter the ABB FIA Formula E Championship in November: the 99X Electric.

Sports car, redesigned with sustainability in mind: the
The first all-electric sports car, the , marks the beginning of a new era for as the company systematically expands its product range in the field of e-mobility. The four-door sports saloon is a unique package, offering typical performance, connectivity and full everyday usability. At the same time, ultra-modern production methods and the product features of the set new standards when it comes to sustainability and digitalisation. The first models in the new series are the S and . They are at the cutting edge of and are among the most powerful production models that the sports car manufacturer currently has in its product range.

The S and are now available to order and cost 185,456 euros and 152,136 euros respectively in Germany, including country-specific equipment and VAT.

New additions to the 911 family: the 911 now also with all-wheel drive
The 911 is extending the model range of the eighth generation as a and Cabriolet. The new standard 911 models can now also be ordered with all-wheel drive. Like the rear-wheel-drive 911 models, the 911 4 and 911 4 Cabriolet develop 283 kW (385 PS) at 6,500 rpm from the 3.0-litre six-cylinder boxer engine with biturbo charging.

New plug-in hybrid models for and
In the , the combination of a 3.0-litre V6 engine and electric motor generates a system output of 340 kW (462 PS). The vehicle has a fully electric range of up to 43 kilometres with zero local emissions.

The S is also new. The most powerful member of the range with 500 kW (680 PS) is available as a and . It is powered by a 4.0-litre V8 engine in combination with an electric motor. The purely electric range of the S is up to 40 kilometres.

Flagship model with more power and lower fuel consumption: the
The new claims the top spot in the category for sports cars in compact SUV format. The new six-cylinder biturbo engine delivers 324 kW (440 PS). This represents ten percent more power output than its predecessor from 20 percent less displacement. The standard high-performance brakes are equally impressive when it comes to deceleration: the is braked by the exclusive Surface Coated Brakes (PSCB).

Prices for the new start at 91,922 euros in Germany, including VAT and with country-specific equipment.

Return to formula racing: the 99X Electric
After more than 30 years, is returning to formula racing. With the 99X Electric, the company is establishing a further milestone on its path to works entry in the ABB FIA Formula E Championship 2019/2020. The entry into Formula E and the associated reorganisation of motorsport commitments is derived from the Strategy 2025. In addition to purist GT road sports cars, all-electric sports cars have a fixed place in this strategy. Both will form part of the motorsport world in the future. Presence and success in motorsport with electrically powered race cars is an important part of the company’s “” strategy. The 99X Electric will also serve as a development platform for future all-electric series production cars.


Further information, film and photo material in the Newsroom: newsroom.porsche.de