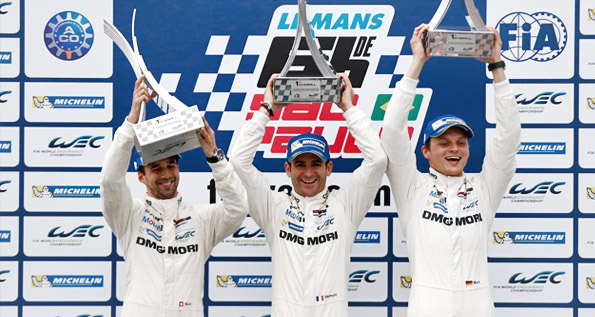 Stuttgart. The Team has achieved its maiden win with the 919 Hybrid in the final race of the 2014 FIA World Endurance Championship in São Paulo with the driving trio of Romain Dumas (France), Neel Jani (Switzerland) and Marc Lieb (Germany). At the same time as the team achieved the biggest success of its debut season, it had its deepest shock when Mark Webber had a very heavy accident in the sister car with less than half an hour to go before the end of the six-hour race. The Australian, who shares the Le Mans Prototype with Timo Bernhard (Germany) and Brendon Hartley (New Zealand), crashed heavily into the barriers at the fast last turn of the lap. He was in sixth position. The initial information the team received from the medical centre at the track was that he was not badly injured. However, he has been transferred to a hospital in São Paul for further checks. The race finished behind the safety car with Neel Jani at the wheel of the winning car.

How the race went for car number 14:
Lieb started from second, but lost one place to a Toyota on lap one. After breath-taking attempts to get the position back, after 37 laps he handed over the car, which was still lying in third, to Jani. The Swiss continued to attack the Toyota, they swopped places, but when Jani handed over to Dumas after 76 laps the car was still third. Dumas only got by when the Toyota had contact with another car on lap 88. On lap 105 Dumas had to pit early because of a right rear puncture. Lieb got behind the wheel again and took the lead after 119 laps when the sister car suffered problems. Lieb pitted after 144 laps to hand the car back to Dumas. After 183 laps Jani took over with the car lying second. At his final pit stop after 222 laps he stayed in the car and took the risk not to change tyres to save time. The risk paid off.

How the race went for car number 20:
Bernhard started from pole position and was leading by 12 seconds when he handed over to Webber after 38 laps. Webber stayed in the lead of the race, despite some trouble in traffic, and handed over to Hartley at the end of lap 79. For the Kiwi and car number 20 the dream to win the race was over soon as an unidentified problem cost some engine power. After 119 laps Hartley handed over to Bernhard, who continued in third. During a full course yellow after 153 laps Hartley got behind the wheel again. After 193 laps Webber took over again, with the car having meanwhile dropped back to sixth place. He had his last pit stop after 227 laps and a heavy crash in the fast last corner of the track when the race was on its 239th lap with less than half an hour to go.

Fritz Enzinger, Vice President LMP1: “The most important news of today is that, given the circumstances, Mark Webber is in good condition, according to the first information from the doctors. I find it hard to believe that we really managed to win our first race in our first WEC season, especially as our joy is overshadowed by Mark’s accident. This weekend we have been fastest in every session and had both cars on the front row. The race was a thriller until the very last lap. After three tough years we have achieved this win with a great team in our debut season. Congratulations to the team – I’m very proud of them.”

Andreas Seidl, Team Principal: “According to our information Mark seems to be okay after this heavy accident. This weekend all drivers, mechanics and engineers have completed the last step we had on the agenda for this year: winning a race on our own merit. We were able to show what we have learnt in our debut season. Be it in terms of tyre management, pit stops or other operational aspects – our team was top in every regard. Many thanks to everyone who contributed – here on track or back home in Weissach. Our 2014 mission is over, and now we are looking forward to the next season.”

Romain Dumas (36, France): “It is great we have won that race for , but, of course, it was a lot more important to know that Mark was okay. My first stint today ended early due to a right rear puncture. I don’t know what caused it, but maybe some debris. When I was back in the car later in the race I had a much better time. The grip level of the track had improved and we had changed the tyre pressure in the rear. The car was really good.

Neel Jani (30, Switzerland): “This was a tough race – every lap in qualifying mode and good battles with the number 8 Toyota. That it worked out in the end is almost unbelievable. Together with Romain and Marc we achieved the first pole position for the 919 Hybrid and now the first win. To me this was a dream season. The next dream would be to win the World Championship and to take Le Mans. We hope this is what the future brings. We are now even third in the drivers’ championship – who would have believed that?

Marc Lieb (34, Germany): ”What a day for our team! On lap one I lost one position to a Toyota, he surprised me with boosting in a corner, as I wasn’t expecting it. Afterwards it was impossible for me to get past him, although I had the faster car. I tried everything but he was all over the place. The second time in the car my biggest problem was tyre pick-up in traffic as soon as I had to leave the racing line. It was like driving on ice.”

Timo Bernhard (33, Germany): “I had a very straight forward first stint with leading the race from the start until our first pit stop. I handed over the car to Mark Webber with a 12 second lead. Managing the traffic was really challenging, especially towards the end of my stint when I had some bad luck with slower cars. The heat was also really tough. My second stint later in the race wasn’t as satisfying, because by then our car didn’t have its full power anymore. However, this isn’t important anymore. All what counts is that Mark is okay.”

Brendon Hartley (25, New Zealand): “This was an emotional rollercoaster with the most important news being that Mark is alright. The beginning of my first stint was great when I was leading the race. Timo and Mark had done a great job to bring our car to where it was and it felt fantastic. Then, about ten laps into my stint unfortunately we lost some engine power. We could not defend our position and dropped back. But at least we could have finished the race and it was great to drive on this track. However, this is overshadowed after Mark’s accident.”