Whether Cabriolet, , Roadster, , or Spyder— has a special solution for driving with an open top. We provide an overview of the different convertible roof systems and how they developed.

The very first one was open, and so is the most recent one. Sixty-six years lie between the legendary No. 1 of Ferry and the new 911 . Sixty-six years in which drivers have enjoyed being one with the elements at any time of the year. In a Cabriolet, , or Roadster—seeing, hearing, smelling, and feeling everything. It is a driving experience that could not be any more authentic, direct, or intense. Pure .

In the interest of more tranquil moments, there is also the top. It, too, has been around for 66 years. What the No. 1’s hood and the 911 ’s top have in common is an outer cover made of fabric. What differentiates them is the fabric itself—and what lies underneath it. The top of a these days is a microcosm of highly refined materials, innovative technology, and sophisticated kinematics. Over the past 66 years, the development of the top has been yet another core area of expertise at . 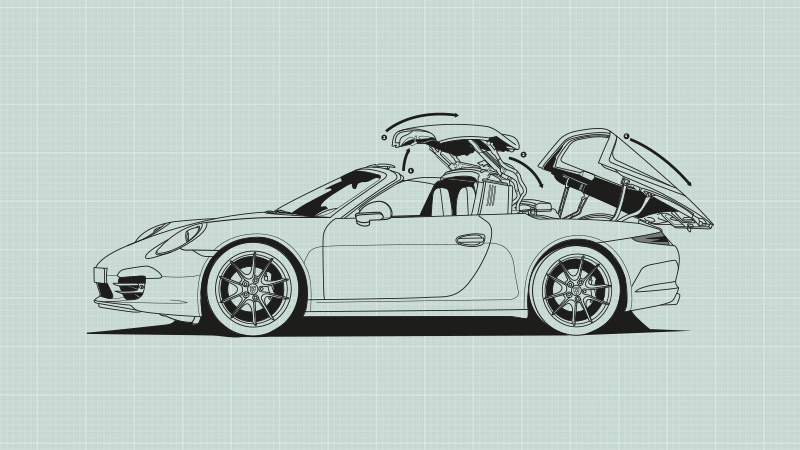 The top opens fully automatically over the rigid bar and makes a Z-fold under the glass dome swinging to the rear.

Expertise, and also a question of character. The designs of their tops are as unique as the sports cars themselves: the has its own very special version, and the 911 has two at once with the Cabriolet and the . The 918 Spyder super sports car opens up in a completely different way, and who could ever forget the unconventional tops of the Spyder and the various 911 s?

The “top of the tops” is the panel bow top on the current 911 Cabriolet, where has set a new standard for folding tops. “It means we have the most high-grade top currently available,” says Dr. Heinz Soja, head of Body Mechanics Development and a team of seventeen developers who work on convertible roof systems. With lines identical to those on the , the Cabriolet’s fabric top traces an elegant arc from the front windshield frame to the lid of the roof compartment. No ribs are visible under the fabric, nor are there any other elements that might interrupt the smoothly flowing design. “The Cabriolet is as perfectly formed as the ,” says Soja with satisfaction. “You won’t find that anywhere else.” 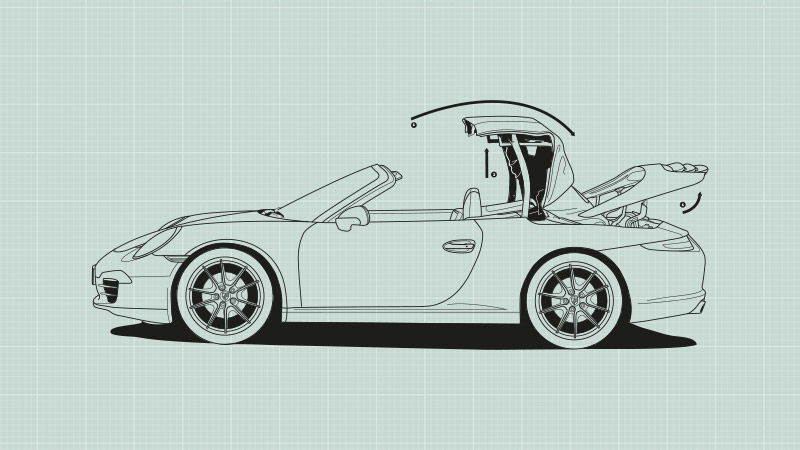 The panel bow top gives the Cabrio exactly the same silhouette as the when closed. Its automatic Z-folding mechanism operates at speeds of up to 50 km/h. 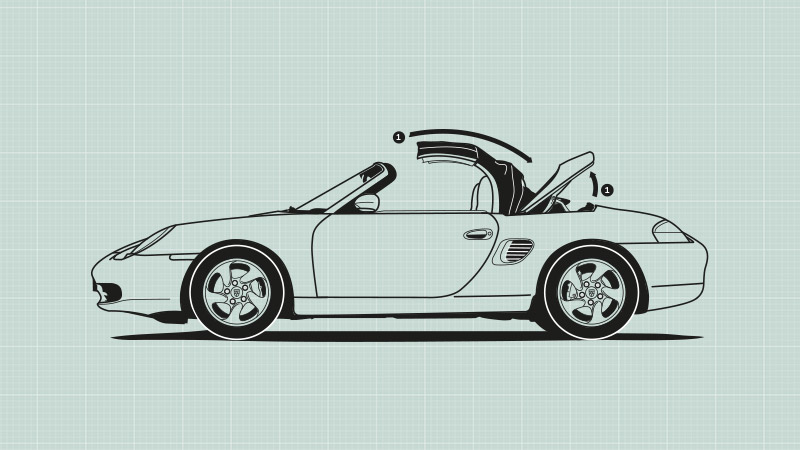 The first standard-series top with a Z-fold (semi-automatic). Its outer surface forms the top of the “Z,” which settles flush into the roof compartment.

The panel bows are what make this possible. The fabric top—with the exception of the side parts—stretches over a firm surface composed of four individual but perfectly aligned magnesium segments. “Lightweight construction is extremely important for every top,” notes Soja. “The less mass there is up there, the lower the center of gravity.” That’s the be-all and end-all for sports cars, encoded in the DNA of .

The top is up now. With everything closed off, the driver and passenger enjoy superb climatic and acoustic conditions, closer than ever to those of the . Under the exterior fabric there is a layer of butyl that makes the roof absolutely watertight, and then a mat of thermal and acoustic insulation covering the entire structure. On the inside, rigid panels line the roof segments. The sides are completely covered with stretched fabric, so that no technical components are visible when the top is closed. And yet another detail makes the design of the top of the 911 Cabriolet unique—namely, the integrated electric folding wind deflector. “You won’t find that in any other 2+2-seater either,” says Soja.

The developers were consumed with the idea that the new top of the 911 had to be completely effortless to operate. The result is a central roof section that opens fully automatically, in spectacular choreography, with the moving rear window. The top is literally on top of it all. The fabric top with the two magnesium panel bows comes mainly from the Cabriolet. “Our customers want these visuals,” explains Soja. “They want people to notice that it’s a fabric top.” has also recently hired a textile engineer for the tops it will be making in the future. Her tasks are to work out what the perfect seam should look like, how to present the high-grade fabrics in an even better light, and how to enhance the cross-sectional appearance all the more. 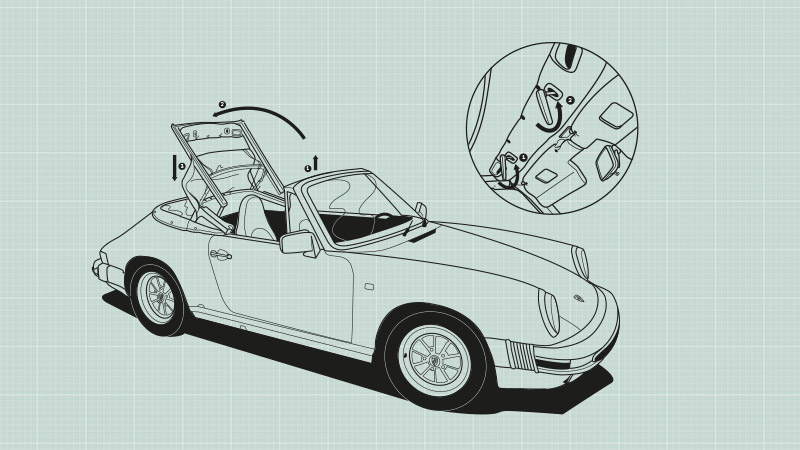 The top of the first fully convertible 911 Cabrio was operated by hand. When open, the K-fold had to be protected by a tarp. 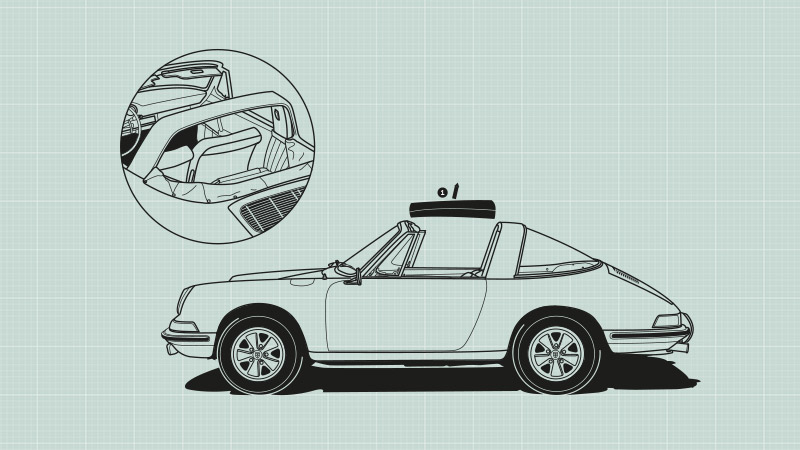 A safety convertible with a rollover bar, the had a removable vinyl top and until 1968 a foldable plastic windshield (detailed view).

tops are no strangers to superlatives. They take fewer than ten seconds to go from closed to open—and in the 911 Cabriolet it can even do it at speeds of up to 50 km/h. The same is true in reverse, from open to closed, as well. That is a record. No fully automatic roadster roof can be closed faster than that of the . This record time is one of the successes made possible by lightweight construction. The front magnesium frame of the top not only lowers the weight but also is dimensioned in such a way as to cover itself when opened. There is no need for an additional cover—and its extra weight. Moreover, this roadster top is as quiet as a mouse. In the current , is using the acoustic version of a special fabric to considerably reduce the level of noise in the interior. 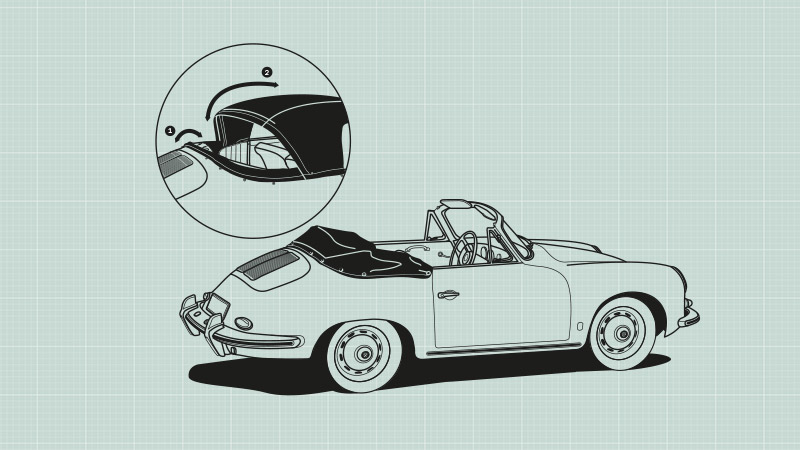 When series production started in 1950, the 356 was also available as a Cabrio with a collapsible top. The rear window of the 356 B could be opened by a zipper.

But can do other things as well. It can show its purist side, depending on the character of the sports car in question. For the 918 Spyder, for example, that means two carbon shells to remove by hand, without any automatic assistance. That cuts the weight and lowers the center of gravity—the top priority for ’s super sports car. Or take the lightweight top on the 911 from 2010. It was an easy-to-operate kinematic masterpiece that reflected the purist speedster concept in an especially sophisticated way. This superior-quality top could go through the carwash and resist winter weather, with no effect on speed when either open or closed.

In contrast, the top on the Spyder from the year before served only to protect against the sun or bad weather. Developed primarily to be driven when open, this two-seater featured an especially lightweight, flat fabric cap on a carbon frame that could be closed with just a few movements. These designs attract attention. “We were asked to design tops not only for cars but also for yachts,” remarks the developer Soja. But had to decline the invitation. The open sports cars simply took precedence.

EditorialThe Efficiency of RationalityTop SecretRacing is a state of mindThe key to it allRacing RelativesOff cameraSchooling PerformanceMagic with Plastic, One Brick at a Time
Build & Find
Online Services
Behind the Scenes
Company
Share Page
Connect with
HOME
Change country/region: