Two races at once

Racing directors tête-à-tête. A verbal lead-up to Le Mans with Fritz Enzinger and Hartmut Kristen. One is responsible for the 919 Hybrid, the other for the 911 RSR. Twenty-four responses to the challenge.

What does it mean to enter Le Mans with ?
Fritz Enzinger: It’s always very special to race at Le Mans. The atmosphere is unique. That’s why there’s nothing quite like a victory there. But has an exceptional bond with Le Mans on account of its history of successes and the emotions they evoke. No other brand has such a legendary status there.
Hartmut Kristen: I’ve been with since 1994, and some people might think that going to Le Mans now, for the twenty-first time, is nothing really special anymore. But the company’s history of more than sixty years at Le Mans and its 16 overall victories do create enormous expectations that you can’t escape—nor would you want to. Our class victory at the 24 Hours of Daytona in January 2014 has heightened these expectations all the more.

Your most memorable moment at Le Mans thus far?
Fritz Enzinger: Celebrating BMW’s overall victory in 1999.
Hartmut Kristen: I can’t limit it to just one. The double win in the GT class in 2013 was great. And of course the one-two finish in the overall rankings in 1998. The victory by the Dauer 962 in 1994 also left an indelible impression, and we were going through difficult times then. But it’s not just the wins that give you these special feelings. One time we had bad luck and both our cars had to leave the race. A rival of ours who was clearly surprised by this came up to me afterwards and said, “You didn’t deserve that.”

The 911 RSR is a traditional favorite in its class. Although the situation for the 919 Hybrid is differ­ent, the expectations there are high, too. How do you handle the pressure to succeed?
Fritz Enzinger: I try to not leave anything to chance, and to approach everything with a good attitude. There are a lot of things you can’t influence in racing. Everything that happens then is the result of two and a half years of work.
Hartmut Kristen: I try to not think about the pressure, to clear my thoughts, and to run interference for the team. That’s not always easy, but you’ve got to do it.

How do you define success at Le Mans?
Fritz Enzinger: If we’re competitive with our new LMP1, if we’re a serious contender—and finish the race.
Hartmut Kristen: If our cars finish the race in good shape, if we’re competitive, and also, after examining our performance with very critical eyes, if we find no mistakes that we could have prevented. And we have to be better than we were in 2013. Matching last year’s performance is not good enough this time.

Which of the 24 hours is the hardest?
Fritz Enzinger: Dawn on Sunday. When the sun comes up on a clear and warm day, you feel your fatigue. But then you have a long way to go before the race finishes at three in the afternoon.
Hartmut Kristen: Whenever you stay up through the night, your body lets you know at about three in the morning. But in Le Mans that doesn’t matter, you just ignore it. 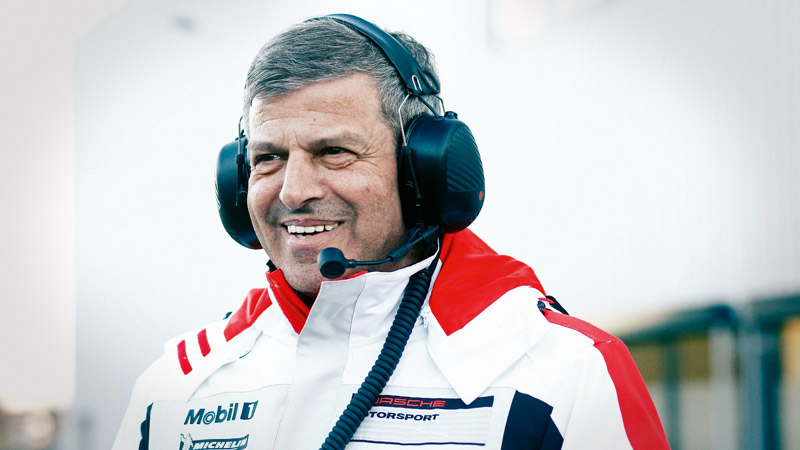 How do you and the team stay awake? Is it possible to practice that beforehand?
Fritz Enzinger: You can do some things to lay a strong foundation. We’ve set up a fitness center in Weissach where the team prepares physically. They really appreciate that. And we also have a professional program for mental preparation. The drivers each have their own individual training programs.
Hartmut Kristen: You can at least make sure that you arrive well rested and that you’re in good physical shape. The rest is a matter of adrenaline.

What will you do the day after the race?
Fritz Enzinger: That depends more than anything else on the results … But no matter what happens, I hope I’ll feel good about it.
Hartmut Kristen: Like always, I’ll get up at five in the morning and drive home. Ideally together with someone so we can discuss and analyze the race.

How often do you check the clock during the race?
Fritz Enzinger: Constantly. Not my watch, but rather the monitor with the times.
Hartmut Kristen: A lot before the start, when the countdown is running. Then much less often for about 22 hours. The change in drivers becomes a rhythm that marks time, and more or less replaces standard clock time. Toward the end of the 24 hours I look more often—although that doesn’t make the clock run any faster.

What’s the biggest challenge during the race?
Fritz Enzinger: For us it’ll be a matter of energy management. We have to drive as long and as fast as possible on a small amount of fuel. That’s a new challenge, and it’s also the biggest one right now given the absence of experience to draw on.
Hartmut Kristen: Staying calm, not making mistakes, concentrating on what you can influence. You have to eliminate or tune out all disturbances in order to keep cool even in critical situations—regardless of how hectic things are around you.

Should all race-car drivers enter at least one sports-car endurance race?
Fritz Enzinger: I’m not sure if they all have to do that. But this type of race is in fact the most complex challenge. Not only do the drivers experience the passion and the struggle of their own performance just like in Formula One, but they’re also dependent both on their teams and, very directly, on how their teammates drive.
Hartmut Kristen: I, too, wouldn’t claim that you can’t be a great race-car driver if you haven’t done a race like this. But it’s a special challenge in many respects. Le Mans is not an event for soloists. And it happens only once a year. So if something goes wrong, you won’t be able to make up for it two weeks later. 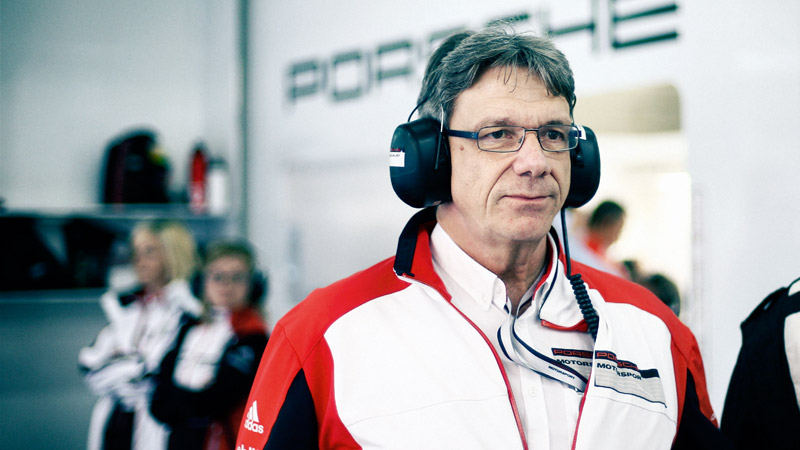 What do engineering teams learn from racing?
Fritz Enzinger: Teamwork and pushing yourself to the limits. Especially with these new LMP1 regulations, the engineers are challenged to develop technology at the very highest level. quite deliberately decided to return to the top category of racing now, in conjunction with the new fuel efficiency formula, because that carries the greatest future potential for standard-series production.
Hartmut Kristen: Racing keeps our development center in Weissach constantly up to date, and forces us to derive the maximum advantages from the cars that we have in order to be com­petitive. For the GT field, road-going cars are always the point of reference. We have to achieve a lot in a short time and with limited resources.

And how does this help ’s customers?
Fritz Enzinger: When the company takes on the challenge of racing, the customers benefit in very fundamental ways. This type of pressure to perform clearly makes you generate and test new developments with maximum efficiency; the test bed for these developments becomes public. The fact that you can measure your own performance and the productivity of your team is one of the things that fascinates me about racing. In the case of the 919 Hybrid, the agenda behind the entire project is definitely about benefiting customers. Innovations like the exhaust heat recovery system have a future in mass production.
Hartmut Kristen: Increasing fuel efficiency is a major aim. Although there are hardly any components that you can transfer 1:1 to series production, you can definitely transfer a lot of crucial knowledge. For example, on how to generate downforce in series-based cars. The big challenge here is to generate as much as possible without creating a lot of drag at the same time. That’s the same objective for our racing cars. And you can clearly see the similarities in the front components.

and : Two Races at Once

At the same world championship, with a shared mentality and a common mission but their own strategies: Fritz Enzinger and Hartmut Kristen will lead the two factory teams at the World Endurance Championship. Different regulations apply to the 919 Hybrid in the LMP1 class and the 911 RSR in the GT category. Moreover, the 919 Hybrid is so much faster that it will lap the 911 RSR. Each team will be driving its own race.

The RSR team led by Hartmut Kristen has a huge jump in experience over the team newly formed by Fritz Enzinger. It’s unusual for a car­maker to enter two factory teams in different classes. Sometimes the exchange of information can be helpful. But it’s much more important for each team to concentrate on its own respective processes, and to make sure it doesn’t distract the other, which is why the two teams deliberately do not have adjacent pits.