The 911 RSR and the new 919 Hybrid will be sharing the course over the 24 Hours of Le Mans. Both are factory racing cars. One stands for evolution, the other for revolution.

The 911 stands there like it owns the place: broad and low. Muscular and menacing. You can almost hear the four-liter six-cylinder engine as images of racing run through your mind. Crossing the finish line for class victories at Le Mans in 2013 or at Daytona in 2014. The 911 RSR is a cannonball. While the 911 retains a familiar air even in its most radical incarnation, the 911 Hybrid prototype at its side makes a completely different impression in such direct comparison.

The cockpit of the new racing car evokes a fighter jet more than a car; the clefts in its silhouette are a product of the regulations and the aerodynamics. The 919 has about twice as much output as the 911 even though it weighs about a third less. The delicate one is actually stronger.

These two distinct brothers will be entering the FIA World Endurance Championship (WEC) for factory teams in 2014. That includes the 24 Hours of Le Mans. But each will be competing in its own class and in its own race. The 911 RSR is considered one of the favorites in the hotly contested GTE Pro class. The 919 Hybrid is a beginner in the most powerful category, the Le Mans Prototype class 1 (LMP1). All eyes will be on this class, because it will produce the overall winner. Following a break of 16 years, is once again taking up this challenge.

The 919 Hybrid at a glance: 4.65 meters long, 1.80 meters wide, and 1.05 meters high. It weighs 870 kilos. Its carbon-fiber monocoque and body parts are Formula One quality, as are its suspension and brakes. And now the eye-opener: this high-tech has a two-liter four-cylinder engine. True, it’s highly charged. And it’s also supported by two ­energy recovery systems. 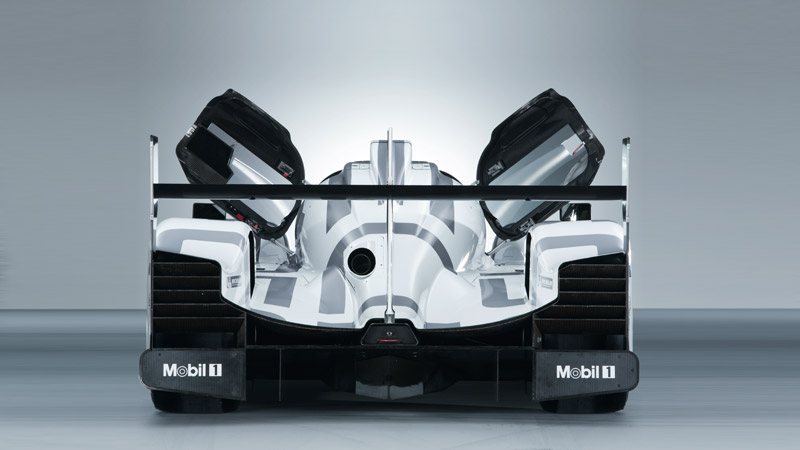 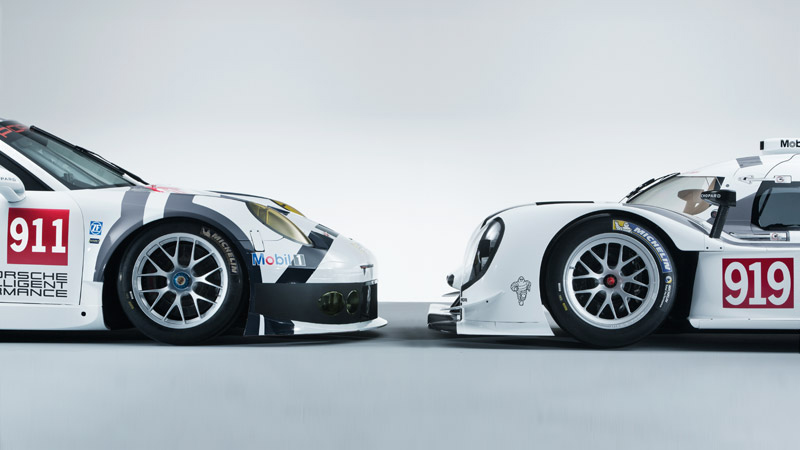 The 911 RSR (left) looks dominant and already has class victories to its credit; the 919 Hybrid prototype is a beginner contending for overall victory

Downsizing and hybridizing at the highest level—that’s what the regulations in the top class of the sports-car world championship want, and that’s also what will mark the future of automotive engineering. ’s chairman Matthias Müller calls the 919 Hybrid “our fastest research laboratory and the most complex racing car that has ever built.” He says this with great respect—in front of his own engineers as well as the competition.

The 919 Hybrid is a pioneer in technology and a product of freedom. Diesel or gasoline engine, aspirated or turbo, displacement and cylinder number? The regulations leave all of that open. But they limit the amount of energy that may be used per lap. This four-cylinder turbo combustion engine with direct fuel injection and a displacement of only 2.0 liters has a V configuration. “There are thermodynamic benefits to that,” explains Alexander Hitzinger, the technical director of the LMP1 project. “And it also allows the engine to play a load-bearing role in the chassis.”

Energy is recovered in two ways. One is thermodynamic, when the exhaust flow drives not only the turbocharger but also a type of dynamo—new technology with great potential for the future. The other is kinetic, via a generator on the front axle that converts braking energy into electrical energy, as in the 918 Spyder. When drivers draw on the energy temporarily stored in liquid-cooled lithium-ion battery packs, the generator becomes an electric motor and powers the front wheels. That gives the 919 Hybrid all-wheel drive for a while.

When and for how long this extra boost is used are two of the key questions for Hitzinger. Strategies can vary depending on the driver, racing situation, and conditions on the course. There are four recovery classes for manufacturers’ hybrid racing cars, based on the following rule of thumb: the more powerful the hybrid system, the less fuel may be used. Taking a 13.6-kilometer lap in Le Mans as an example, cars in the highest recovery class may use eight megajoules per lap, but then only 4.64 liters of gasoline. In the two-megajoule class they are allowed 5.04 liters a lap. The LMP1 racing cars are supposed to use up to 30 percent less fuel in 2014 than in the year before.

The 919 Hybrid is breaking new ground for the future with its name, as well. With direct reference to the 918 Spyder super road-going sports car, it takes the latter’s fuel efficiency credo even further on the racecourse. At the same time it builds on the tradition of the victorious 917 in Le Mans.

While the LMP1 team largely had a free hand, the 911 arrived already in the form of a body in white. It rolled from the production line in Zuffenhausen and would have made a great 991 4, but fate had something even better in store for it: the 911 RSR represents the chassis of the future.

The GTE Pro category in Le Mans is a real sport for factory teams. That explains the high level of resources put into building the new rear-engine racing car by the engineering team led by Marco Ujhasi. Two hundred hours are needed just to prepare the body in white in order to mount the radiator and tank at the front, reinforce the wheel suspension mounts, and weld the safety cell. As a load-bearing element, it increases the stiffness of the chassis by considerably more than 50 percent. But still the engineers are stingy with every gram. “‘The more the merrier’ is not the rule in racing,” says Ujhasi. “For us, what counts is ‘less is more!’”

In fact the aim is to remain below the regulation weight of 1,245 kilos, in order to use the difference for strategically placed ballast to enhance placement of the center of gravity. How the weight is balanced influences decisively both handling and tire wear on this rear-engine sports car. This is why Ujhasi is shifting components such as the auxiliary oil tank to the fore.

Development never stops—despite the Le Mans class victory last year. For the new season, designers turned their attention once again to the aerodynamics. “In 2013 we had almost too much downforce on the front axle,” says Ujhasi. “We’ve now balanced this out with a broader rear wing.”

The details are what will lead to success on the racetrack—and then flow into standard-series production. Such as the front spoiler flap and the lightweight polycarbonate rear window, which will be characteristic features of the 911 GT3 RS in the future, as well. And there is the rigid suspension for the six-cylinder engine with its approximately 345 kW (470 hp). This served as the model for the dynamic engine bearings that Ujhasi developed for the GT3 and the GT3 RS. “What works in the GTE cars will be benefiting our customers shortly thereafter.” 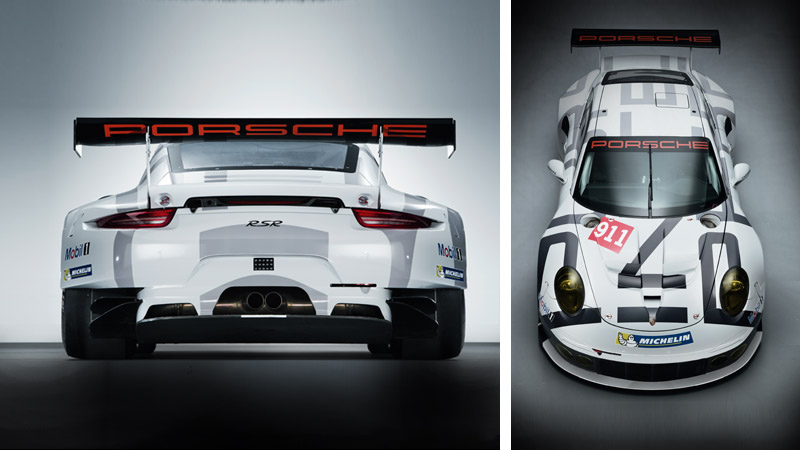 The main priority is the relevance for standard-series production, and thus the benefit for customers. The maximum degree of sportiness and the highest level of fuel efficiency converge in “ Intelligent Performance,” which is the core of the brand. The initial letters of these three words are therefore part of the two factory racing cars’ shared appearance. The two brothers on wheels are a prime example of this philosophy—both in spirit and in arms on the course.

Aerodynamic efficiency means maximum downforce for high speed in curves and stable road-holding with minimum drag. The rule that only closed cockpits are allowed as of 2014 is welcomed by aerodynamics engineers. Airflow can be guided toward the rear wing much more precisely over a smooth dome than through a split open space around a driver’s moving helmet. By contrast, the airflow specialists could easily do without the enormous fin above the engine hood. It increases sensitivity to lateral winds depending on the driving situation. However, it also serves as a brake in the event of an accident. It is now mandatory as a means to prevent the cars from rapidly rolling over. The large openings in the wheel housing disturb airflow from the radiator and the rear. But they also decrease the surface area available for upward pressure and thus reduce the risk of the car taking off. 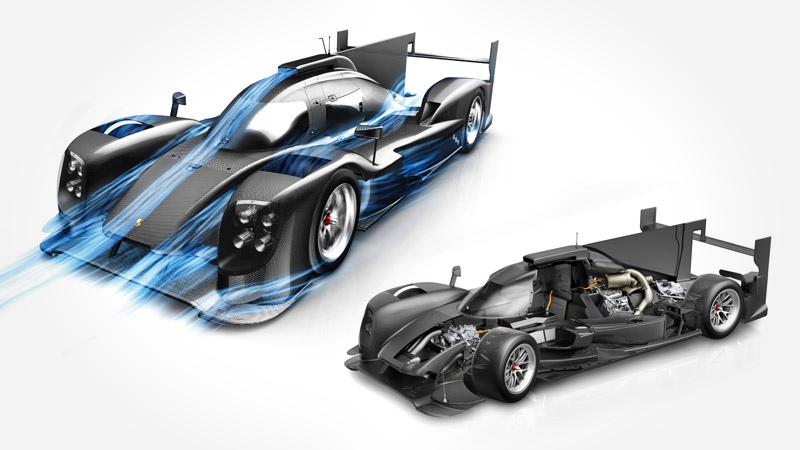 Aerodynamics: The enormous fin and openings in the wheel housing are there for safety reasons