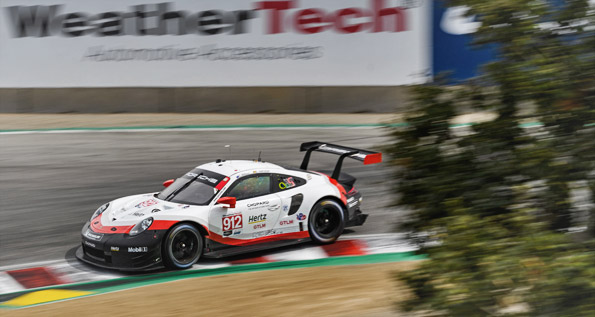 Stuttgart. The GT Team has claimed positions seven and eight at the penultimate round of this year’s IMSA WeatherTech SportsCar Championship. In an uneventful race without any caution phases, the factory drivers Laurens Vanthoor (Belgium) and Earl Bamber (New Zealand) had to grapple with a lack of grip in the No. 912 911 RSR, as did their brand colleagues Patrick Pilet (France) and Nick Tandy (Great Britain) in the No. 911 sister car. Heading to the season finale at Road Atlanta (USA), still holds a convincing lead in the manufacturers’ classification. In the GTD class, has won the Sprint Cup title.

On race day at the Laguna Seca Raceway, the teams and drivers encountered different weather conditions compared to the previous two practice days. The sun barely pierced the thick fog, and the maximum temperature hovered around 20 degrees Celsius. Under these changed conditions, the 911 RSR lacked grip and thus pace. With a view to the championship, the GT Team opted for a low-risk strategy. After a flawless performance from the teams and drivers at Laguna Seca, tackles “Petit Le Mans”, the final round of the season, with a 15-point lead in the manufacturers’ classification. In the drivers’ championship, Bamber/Vanthoor have increased their lead over their brand colleagues Pilet/Tandy to twelve points.

Meanwhile, in the GTD class, has won the manufacturers’ classification of the IMSA Sprint Cup. The two Canadians Zacharie Robichon and Scott Hargrove concluded the race in the No. 9 911 GT3 R fielded by Pfaff Motorsports on fourth place. With this result, Robichon, who is contesting his first IMSA season, has secured the drivers’ title in the Sprint Cup, which consists of the seven shortest GTD races of the year. The race at Laguna Seca marks the final round of this Sprint Cup, with the final ten-hour race at Road Atlanta (“Petit Le Mans”) no longer included in the series. Park Place Motorsports with factory drivers Patrick Long (USA) and his compatriot Patrick Lindsey was unable to contest the race due to an accident in qualifying.

Pascal Zurlinden (Director Factory Motorsport): “The race in the GTLM class was the worst we’ve experienced with our factory cars this season. For once we weren’t competitive and for the first time in twelve months we didn’t finish on the podium. Fortunately, this doesn’t affect our bid for the championship, as we’re heading to the finale at Road Atlanta as the big favourites. We won the Sprint Cup classification in the GTD class with the brand new 911 GT3 R. Congratulations to Zacharie Robichon on winning the title and a big thank you to our team at Weissach for developing a great GT3 car.”

Steffen Höllwarth (Head of Operations IMSA Championship): “We struggled today to maintain a steady pace over a full stint and we could do little against our competition this time. Because there were no safety car phases in the race, our strategic options were also very limited. Under these conditions, we couldn’t do better than seventh and eighth. Luckily, at the end of the day, we got off lightly. Our main rivals in the championship also had problems to deal with. The current situation in the title fight looks good for us as we head to the final round of the season.”

Patrick Pilet ( 911 RSR #911): “This simply wasn’t our race. We already noticed in practice that it’d be difficult for us in terms of tyre durability. Still, we tried our best in the race. But even with an immaculate performance from us drivers and a flawless job from the pit crew, we simply couldn’t do more. Now we’re looking ahead. It’ll undoubtedly be better for us at the final round at Road Atlanta.”

Nick Tandy ( 911 RSR #911): “At Laguna Seca we experienced the exact opposite of the previous race in Virginia, where we brought home a convincingly one-two result. But that’s how it goes sometimes in the fiercely contested GTLM class. When one small thing doesn’t work, you’re very quickly thrown back. That’s what happened to us today. I’m not surprised really because Laguna Seca has not been particularly kind to us in the past.”

Earl Bamber ( 911 RSR #912): “That was a tough race for us. To be honest, judging from the practice sessions, we’d expected this. Laguna Seca is simply not our favourite racetrack. Despite these disappointing results, we’ve taken another step towards winning the title. That means much more to us. Laurens and I have even managed to extend our lead. Now I’m very much looking forward to the grand finale at Petit Le Mans.”

Laurens Vanthoor ( 911 RSR #912): “We still hold a clear lead in the championship. That’s the most important thing after such a difficult race. We had no real chance today because there was too much wear on the tyres. I don’t know if we could have achieved more with a different strategy. It doesn’t matter now. We’re looking forward to the ten-hour race on the outskirts of Atlanta, which is where North America is based. We are keen to secure the championship title at our home race.”

Zacharie Robichon ( 911 GT3 R #9): “After a really tough race, here I am with my first title – that’s sensational. Our first Sprint Cup race at Mid-Ohio didn’t go at all well, but since then we’ve made huge progress. Our Laguna Seca race is proof of that. We weren’t at all familiar with the racetrack, so it was a journey into the unknown. The meticulous work of the team ensured that we could maintain a steady pace and achieve fourth place. That was the most we could do today, and it was enough to win the title for and for me personally. A dream has come true for me today.”